Because of the beer bottles purchased, I went out in the morning in search of a hard-sided suitcase. On the way there, saw Craft B33R Gallery, which was obviously named in honor of 1933, the year Prohibition ended in the USA.

The entire transaction was handled by Google Translate from me explaining we needed another suitcase from my wife “buying too many souvenirs,” and the saleswoman typing “you are good husband”. 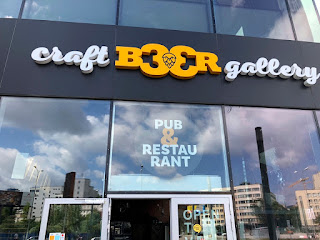 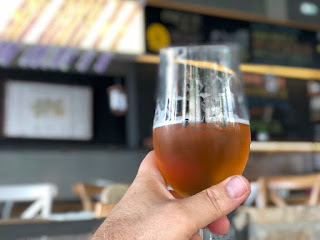 So stopped at the Craft B33R Gallery, and was told politely yet firmly that I could sit next to the bar – that was for staff only. I have noticed that – not at every bar or brewery, but quite a few have no spot to sit while watching suds get slung.

Nice new beer bar with a great selection of beers.

Anyway, only had time for a couple, as we were meeting a relative of my spouse – Greg - who has lived in Bratislava for over a decade. It was so nice to visit in Bratislava with a custom tour from someone who lives there, and could give us the history of things from both a foreigner and native perspective. 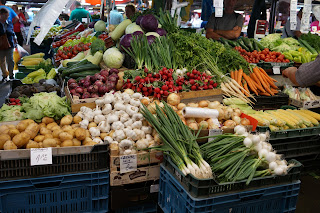 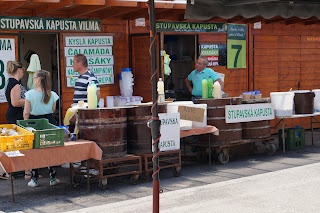 First stop was an open-air market, near the apartment. Fantastic layout of fruits, vegetables and meats. It’s important to remember that Slovakia was communist until the 1989 "Velvet Revolution" started the downfall of Communist Party rule in Czechoslovakia. In 1992, an agreement was to divide Czechoslovakia into Czech Republic and Slovakia, as it was pre-WWI. As such, bags of semi-rotten oranges – as related to us – would be a great find in the State-run markets on the 1980s. 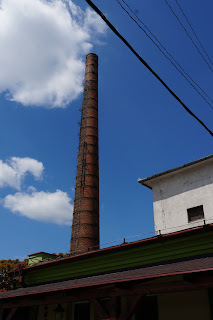 Had lunch at Komin Brewery (pivovar), which has retained a non-functioning chimney as sort of a landmark or beacon. Great logo, but no shirts or any merchandise for sale. 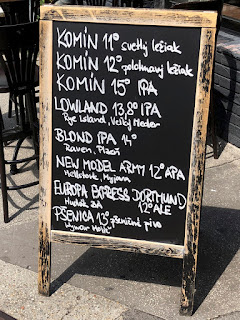 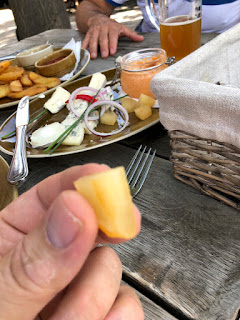 Enjoyed some cheese that smelled like salty toes, but was delicious.

We went  us to his neighborhood and apartment. We loved experiencing the day to day living in a country, and this gave us a snapshot. We shared pictures of relatives and figured out some of the genealogy of our family. 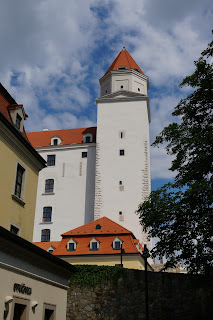 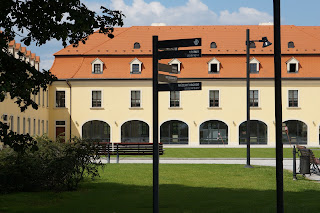 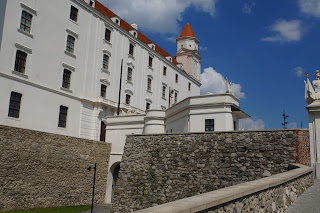 The touring of important places in Bratislava began. We started at Bratislava Castle. The exterior of the castle is beautiful, and the views exquisite. 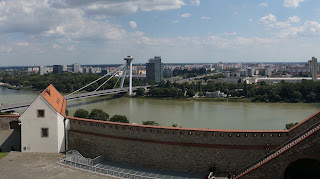 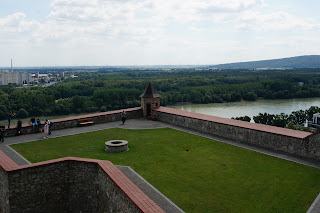 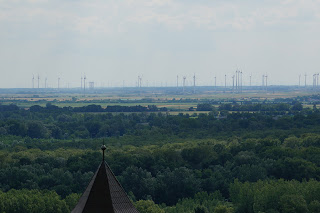 Then a “Hop-On” cab (as no Über) and back to Old Town. We saw St. Marten’s Church and walked through the heart of Old Town. 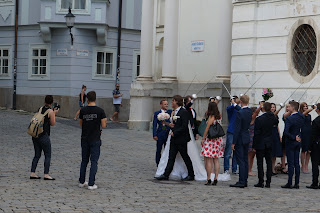 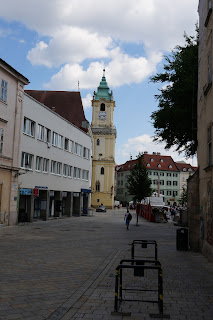 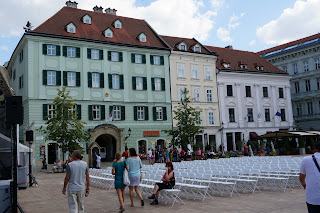 Today was weddings - we popped into two churches just in time for the newlyweds to come back down the aisle. 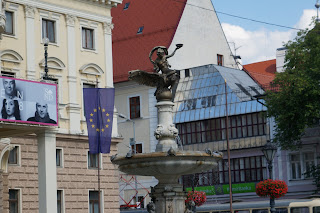 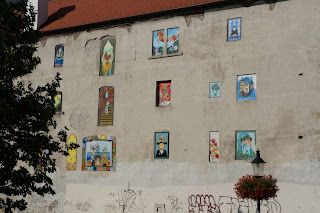 We also saw where some of the Embassies are located, and stopped in for a quick drink at the 17’s Bar. 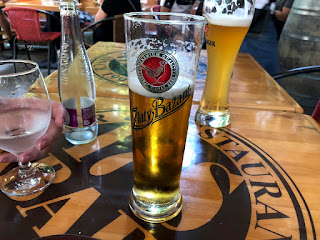 More walking to some other churches and historic buildings. Again, we were reminded this area was an absolute shit-hole at the end of Communist rule. The proud and resolute people of Slovakia built it back up to its former glory. 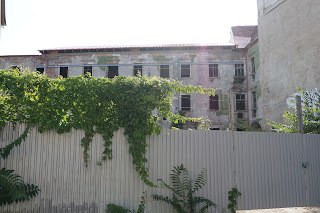 Had a cup of coffee and sat down to watch two groups of Brits joyfully singing in honor of their most recent World Cup win over Sweden. Also saw what appeared to be a couple of sad Swedes. 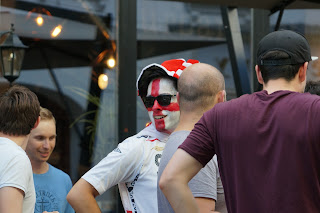 We ended our day at an Italian restaurant, and the food was delicious. We were also entertained by the 50th Birthday Party of another patron. 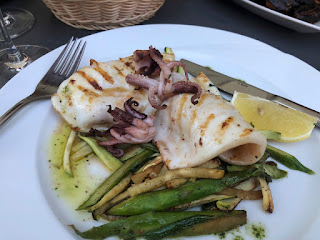 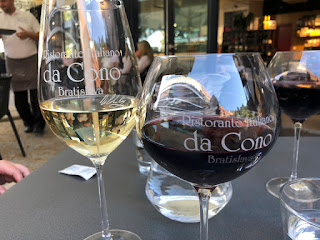 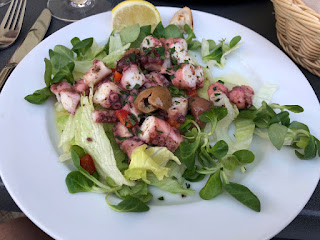 A huge thank-you to Greg for taking the time to show us around the beautiful city of Bratislava.

Had time to go out, and try to hit one more Brewpub, as apparently there was one nearby. I use the word “apparently” as it was unclear on Untapped or Google if this place existed. I asked the Concierge and was told there was a new brewery near where I was going. 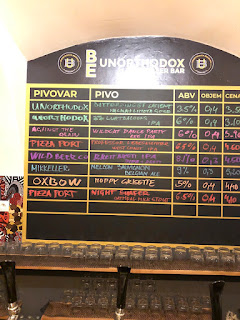 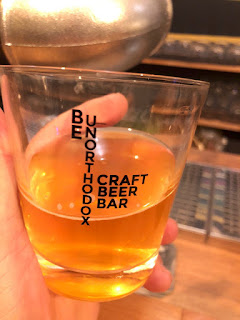 Stopped in at the (BE) Unorthodox Brewing, which was opened only a few days earlier. Tried a couple of their beers from them, and could not pass up a Wild Beer from UK.

The 77 Luftbaloons  was very good. Before anyone disregards this statement, remember these folks were brewing beer over 400 years before the US existed. 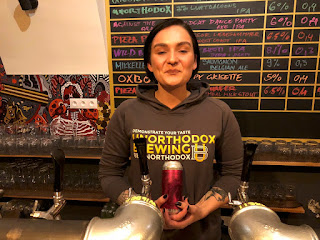 I also – as usual – brought a small beer gift. Here’s a very happy person with a Treehouse (“oh I have heard of them, did not think I would ever got to try one”). And no shirts for sale.

Next door was the Žil Verne bar. I say “bar” as they had beers on, but then it turns out they are in fact a Brewery (yaaaay!) but had none of their beers on (booooo!). And none available tomorrow. 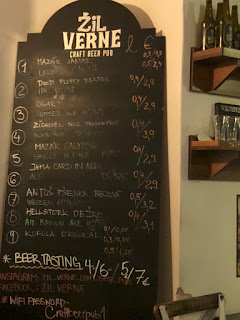 It turns out - according to the Server - they cannot make their beers fast enough. Time for a larger system??

The place had a theme that made me think that “Žil” is Slovak for “Jules,” as in “Jules Verne.” However the real story is The name of the pub “žil verne” translates as “he lived faithfully” but it is also a phonetic transcription of “Jules Verne.” 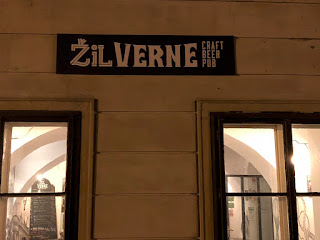 Once again, great logo, no T-shirts for sale.
So I guess Slovakia still has to learn a bit more about Capitalism!

Tomorrow - back to Vienna.