Best Day Ever - for real

Years ago on a Belgian beer tour, I had given that day the appellation of “best day ever.”
I was wrong. Not even close.

Not by a longshot.

We were met by our driver Joseph, and the adventure began. Today we went to the village and property that my grandmother lived in Poland until she legally immigrated to the US in 1913, as a 15-year-old girl; sponsored by her brother. The house is gone, although my cousin, who found the address two years ago, did get us pictures. The gravel area is where the house used to stand. 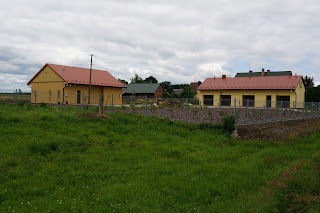 Very moving to stand where your ancestors once did, and think of the enormity of leaving your family behind, forever.

A few yards away was the stream she talked about bringing the cows to drink. 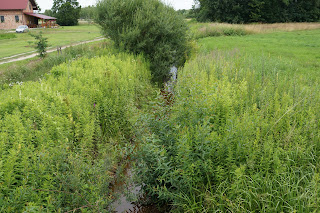 We also saw the church she was part of (it was under renovations) and a cemetery that family might be buried in. 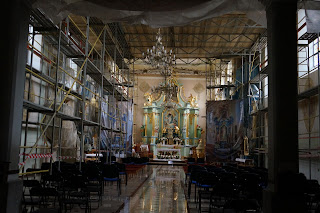 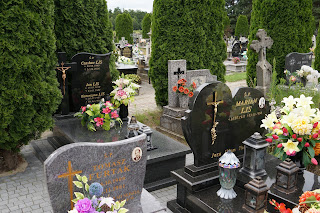 We then went to Skansen - an ethnographic village - which shows what a Polish village/ buildings were like from the 1800s (similar to Sturbridge Village in Massachusetts in the USA). 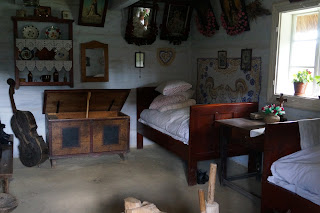 Misread the menu and had tripe soup; but you know what – I have a new favorite soup I think. Also had a

It’s was interesting to see the way of life at that time.

Now, to put on the “beer fan” hat, this is what being a beer fan means - contacting and stopping in to the nascent Lasowiak brewery in Jezone Poland; not even fully operational, but welcomed us with open arms. And opened bottles! 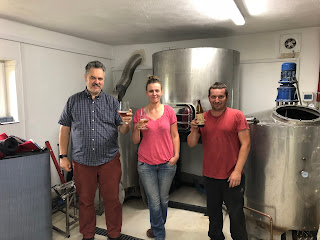 Had this beer, which is a good version of an American Pale Ale, but with a subtle note of Earl Grey tea.

We really wish them the best, and may be back next year – can you say “Polish brewery tour”?

It started with some ham and bean soup – which was a meal in and of itself. But then it was cucumbers, potatoes, and pork cutlets, and cherry preserves on bread for dessert. Millennials in the USA speak of “farm to table” as the style of the day: in Poland it is all “farm to table” – the cherries came from the tree next to the house, the cucumbers and potatoes from their garden, etc. 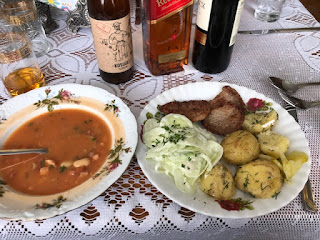 During dinner had the

We conversed about family, hobbies, politics and life using Polish, English, French and Google Translate.  We left very full and having new friends.

Later that afternoon, back at the hotel, went to the Wojkówka Browaru brewpub. Beers were not the best, but regardless, ticked off the monumental beer #9,900. 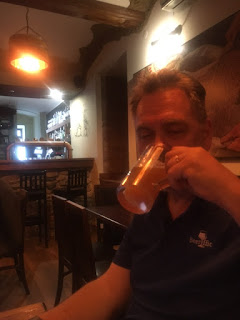 Tried to find another beer bar or brewery, but it appeared to have changed ownership. And beer. Only had a

But scored a goal or three! 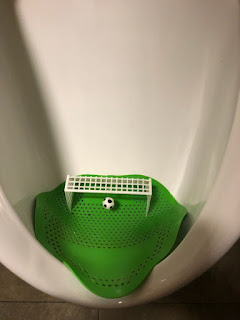 Later in the early evening, found the Lord Jack bar. Besides a comprehensive tap list, they also had one of – if not the best – beer menus I’ve ever seen, as far as detail. 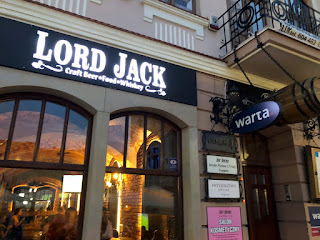 BTW – if I told you how much these beers - plus a generous bowl of frites – cost, you would faint. 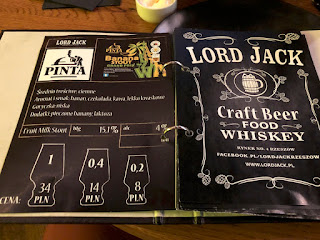 The back bar of the Lord Jack had a glass ceiling, which appeared to be one piece of glass or Plexiglas, which seemed impossible. 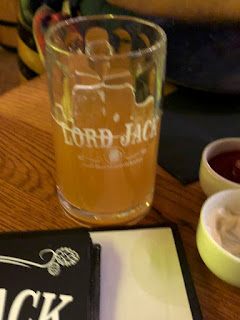 They also have a special version of Jack Daniels which is only bottled for special bars like this, a double impossibility. Our server gave us the “5-Zloty tour” and this place is lie a rabbit warren, with a hidden patio, basement, and private dining rooms. May have to go back for dinner this evening.

Tomorrow is a long train ride from Rzeszów Poland to Brno, Czech Republic. And another brewery hotel.
Posted by Beeriffic at 11:49 PM