Vegas on 6 Beers a Day

When planning a trip to the CES in Las Vegas, or in fact planning any trips, if you are you beer fan it always pays to plan ahead. You review things like Untapped, BeerMapping and Beer Advocate (among others). You also check Google maps to see what is out there for breweries brewpubs and good beer bars near where you'll be staying.

Had a lovely arrival with only one of two engines operating, but that story is actually old news now. Monday (1/5/'15) at the CES was Press Day at the Mandalay Bay Hotel. This is a rather frenetic exercise, for every hour there are two concurrent sessions chock-full of news, and I had to report on them. 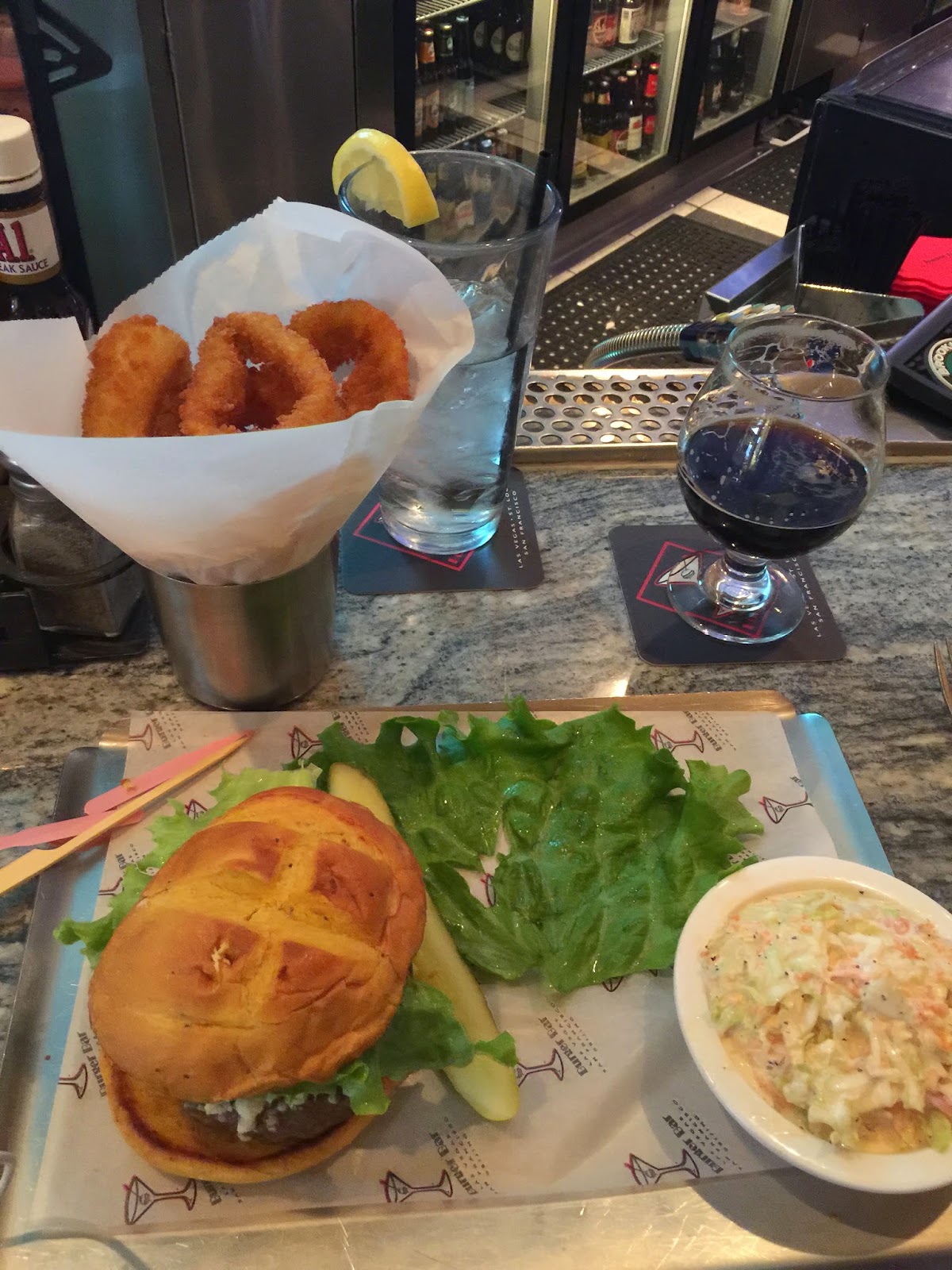 Right around noon was lunchtime, so I ran out quickly to the Burger Bar in the Mandalay Place shopping area. They allegedly had a pretty good beer selection and good food. 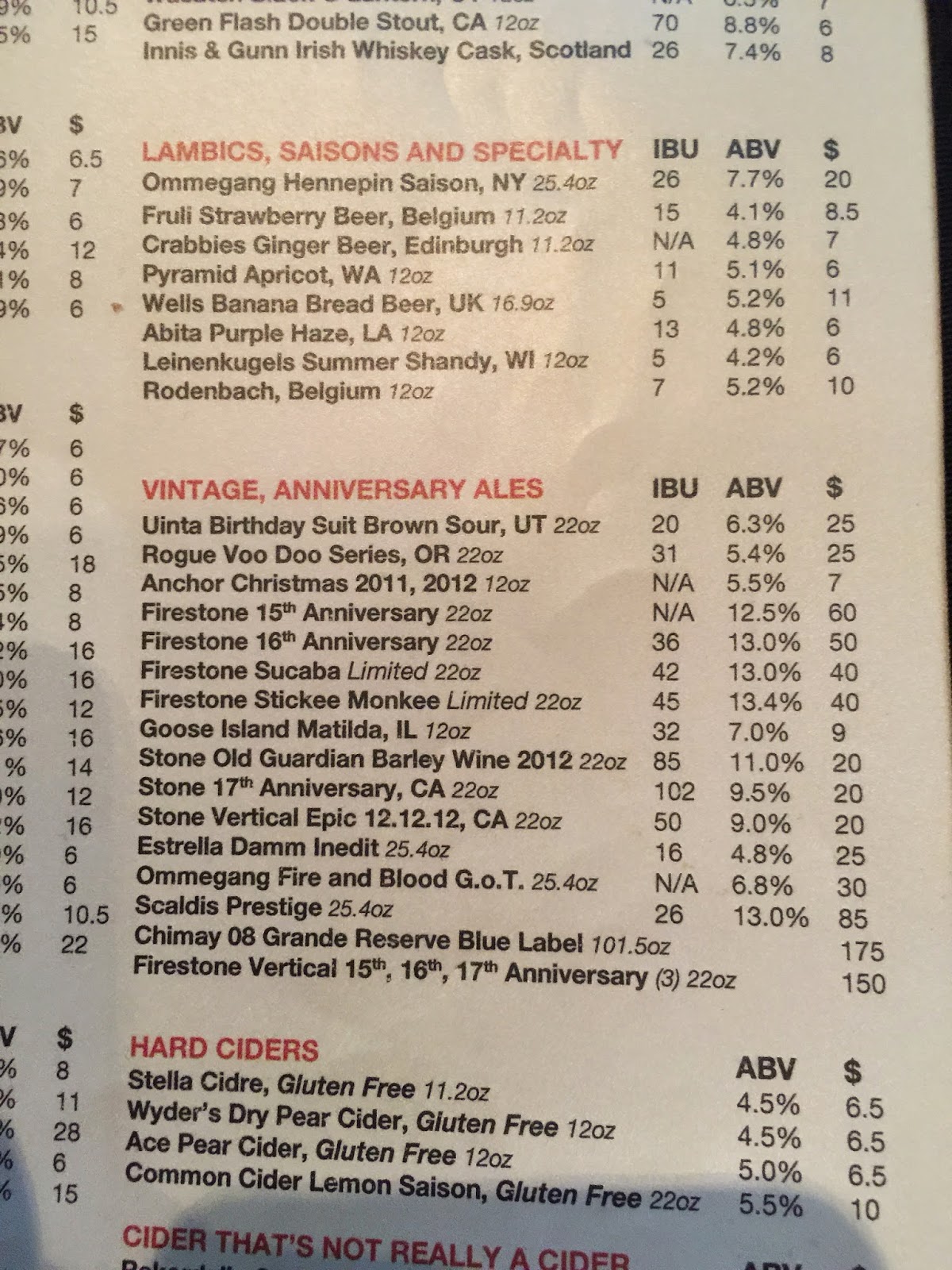 I could definitely vouch for the food; the burger was wonderful, rare (no qualms about that), juicy, with a good toppings and condiments. What I did not expect to see was a New Zealand

Once the press conferences were over I figured, hey, why not go back there for dinner; it's close to my hotel, I know the food is good, and the beer selection is very good. 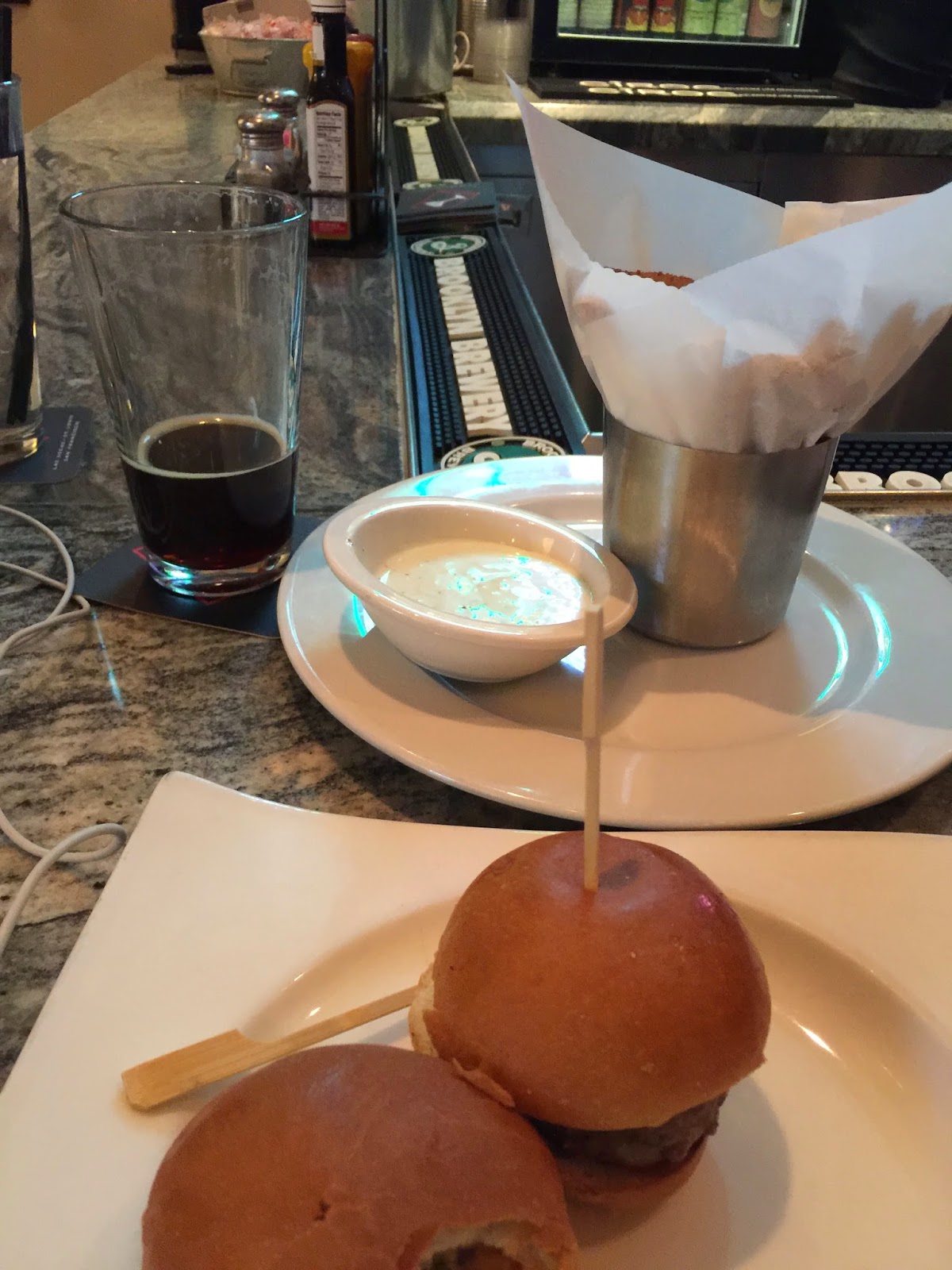 As it turns out it was happy hour so there were some great appetizers for a real sweet price. Started out with a very light

Thankfully I realize just before I ordered another beer, it was time to for the bartender bring out the "big guns." I have been keeping track of my beers for many, many years; starting with a database on the Apple Newton, and transferring the same data through various phones (Palm, WM) to a FileMaker database on the iPhone.

And yes, I even now note the Schaumhaftvermoegen value. 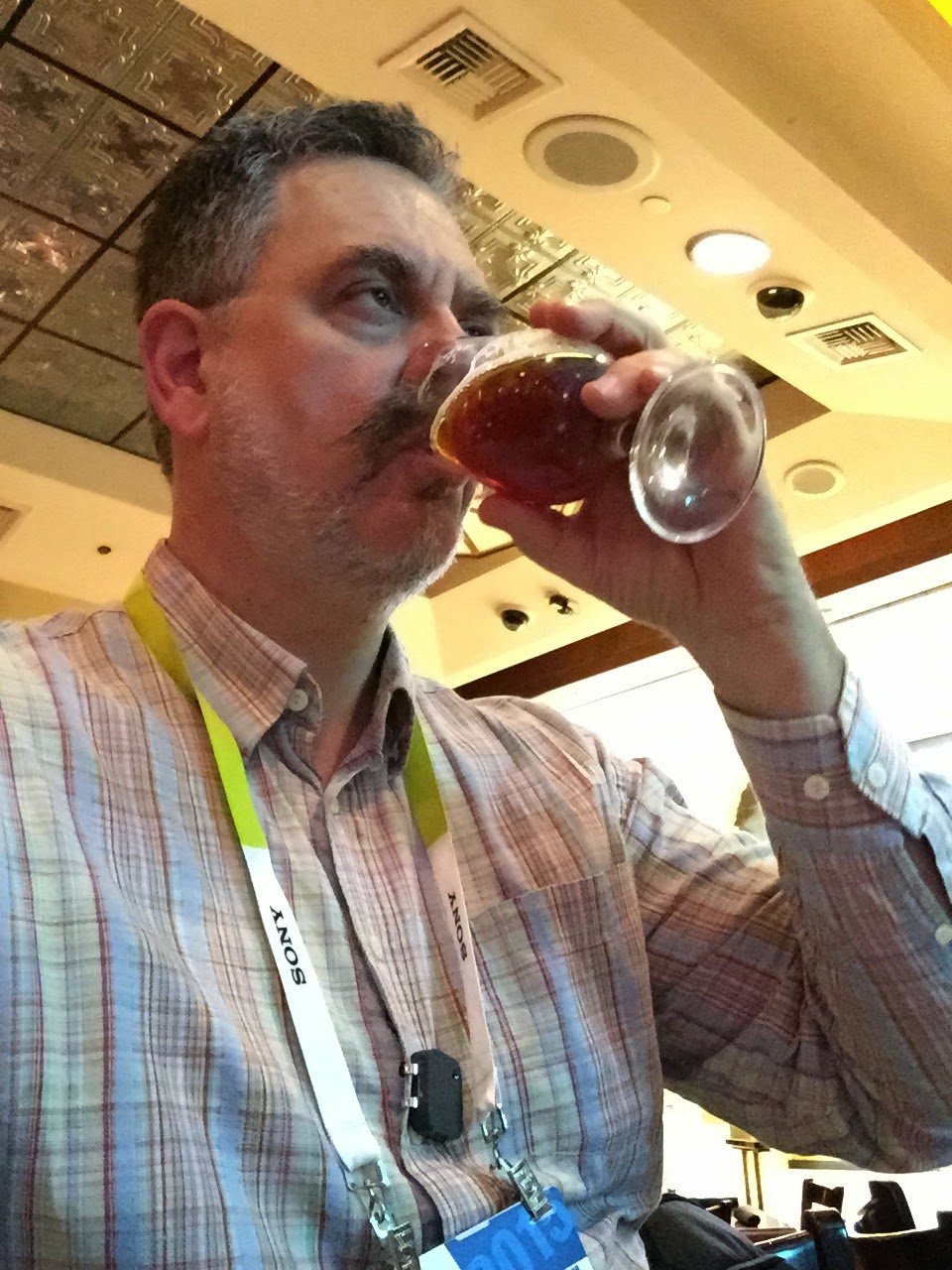 This barleywine was not aggressive boozy, just a bit, with a peachy aroma and an absolutely wonderful finish. As this was not a $1.99 special, the manager Scott came over to see who had ordered it, and why. 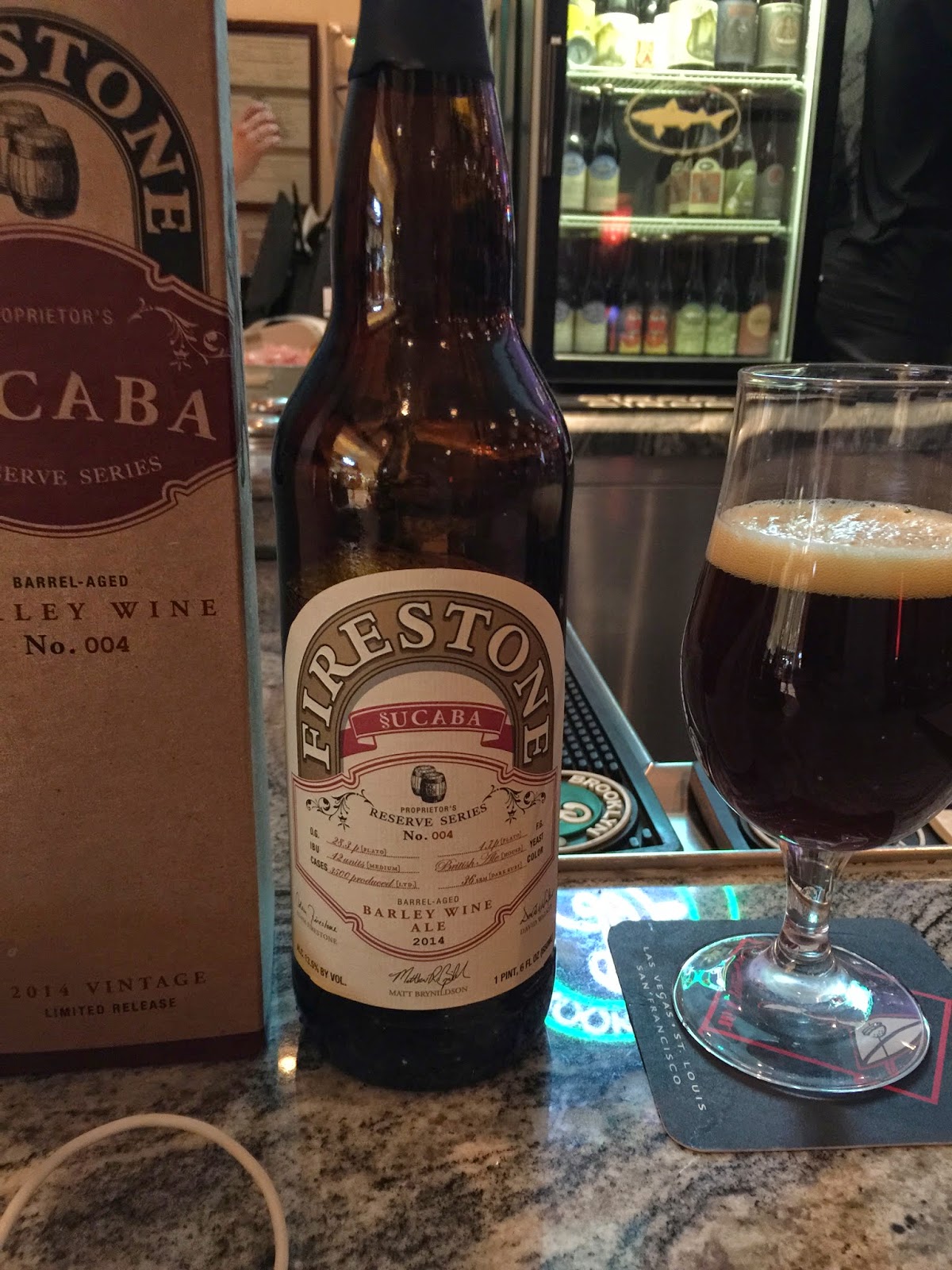 We chatted a bit and I offered a sample to him and any bartenders who wanted it. Note this is proper beer tasting etiquette, if you choose to, when you order a special beer bottle. Just be sure it is acceptable to the folks running the place. 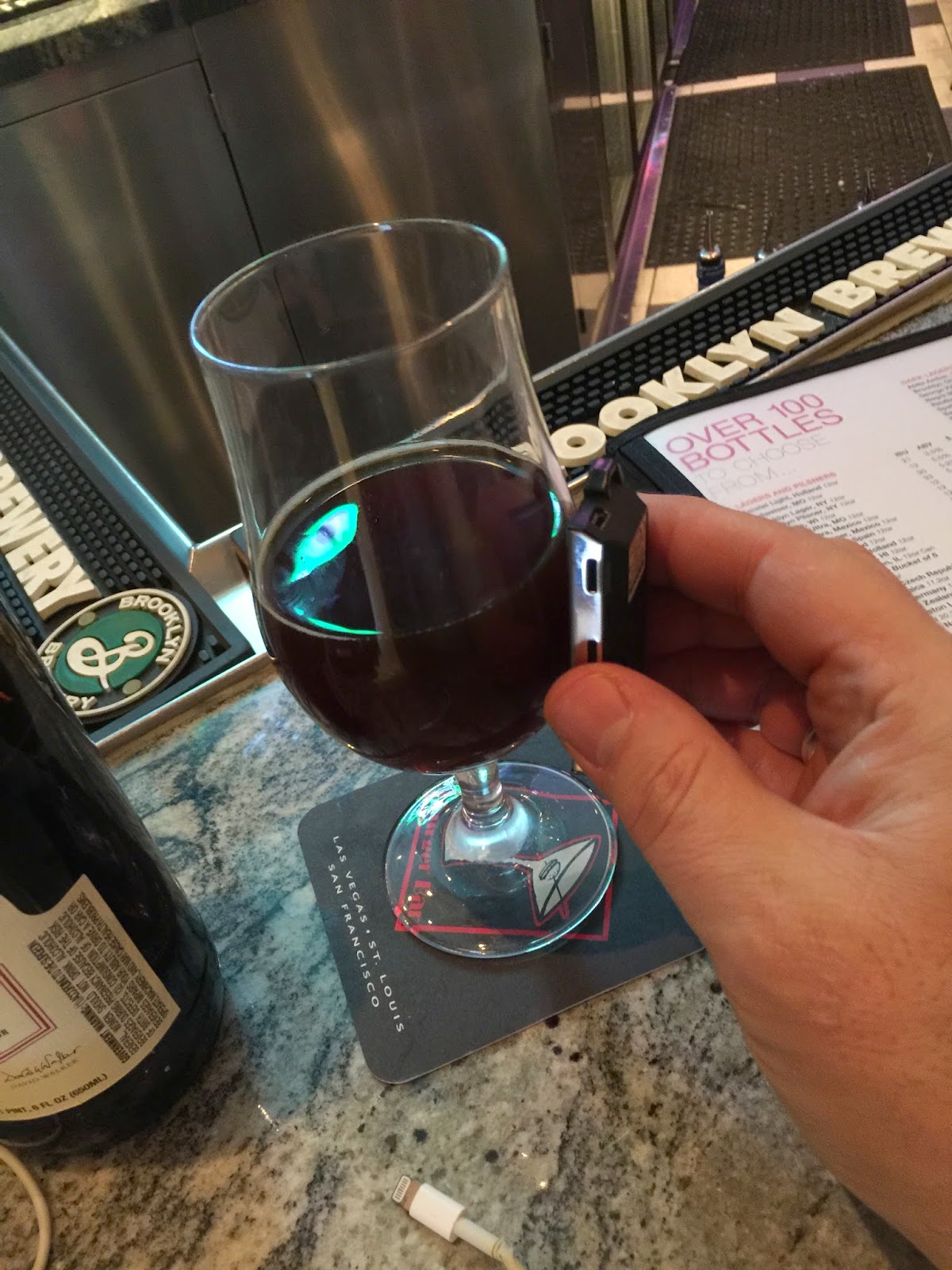 And using a SensorDrone, the near-perfect serving temperature of 14 C was noted!


Next day at lunch, I just grabbed a quick sandwich as I brought my own beer with me. At a small convenience store I had picked up a bottle of

Moab   Black Imperial IPA Desert Select   Ale, IPA, Imperial, Black   [8.5]
It's a surprising find, especially for just a convenience store, but this is Vegas after all.

That evening took a quick ride up to Banger Brewer, and had a pleasant evening with Cory, Mark, and Nick, and a few others. 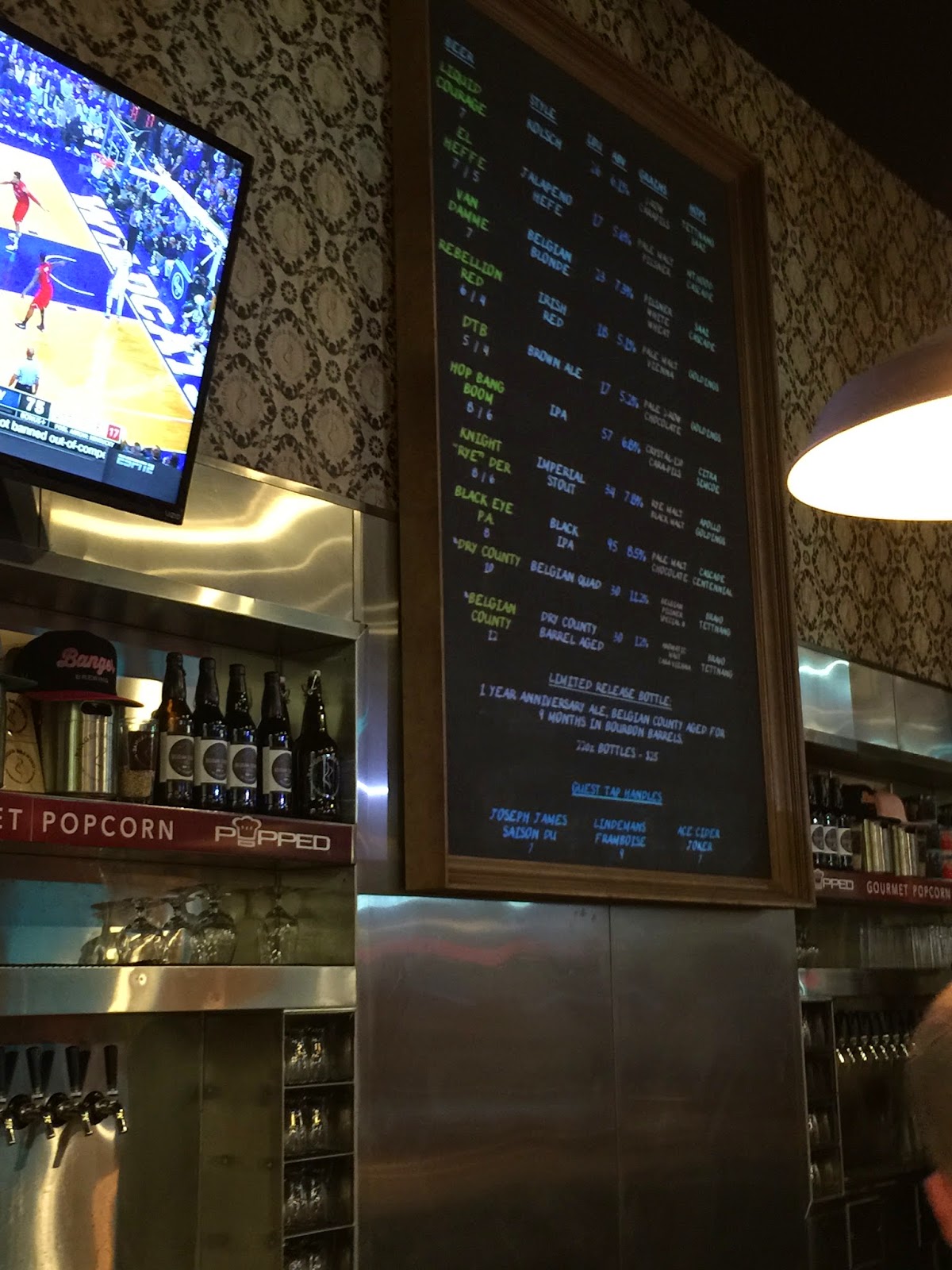 These folks offer free tours so just use the Web form and arrange one if you want to. Due to slight miscommunication, I missed the start of the tour but was able be given a brief tour later from Nick. 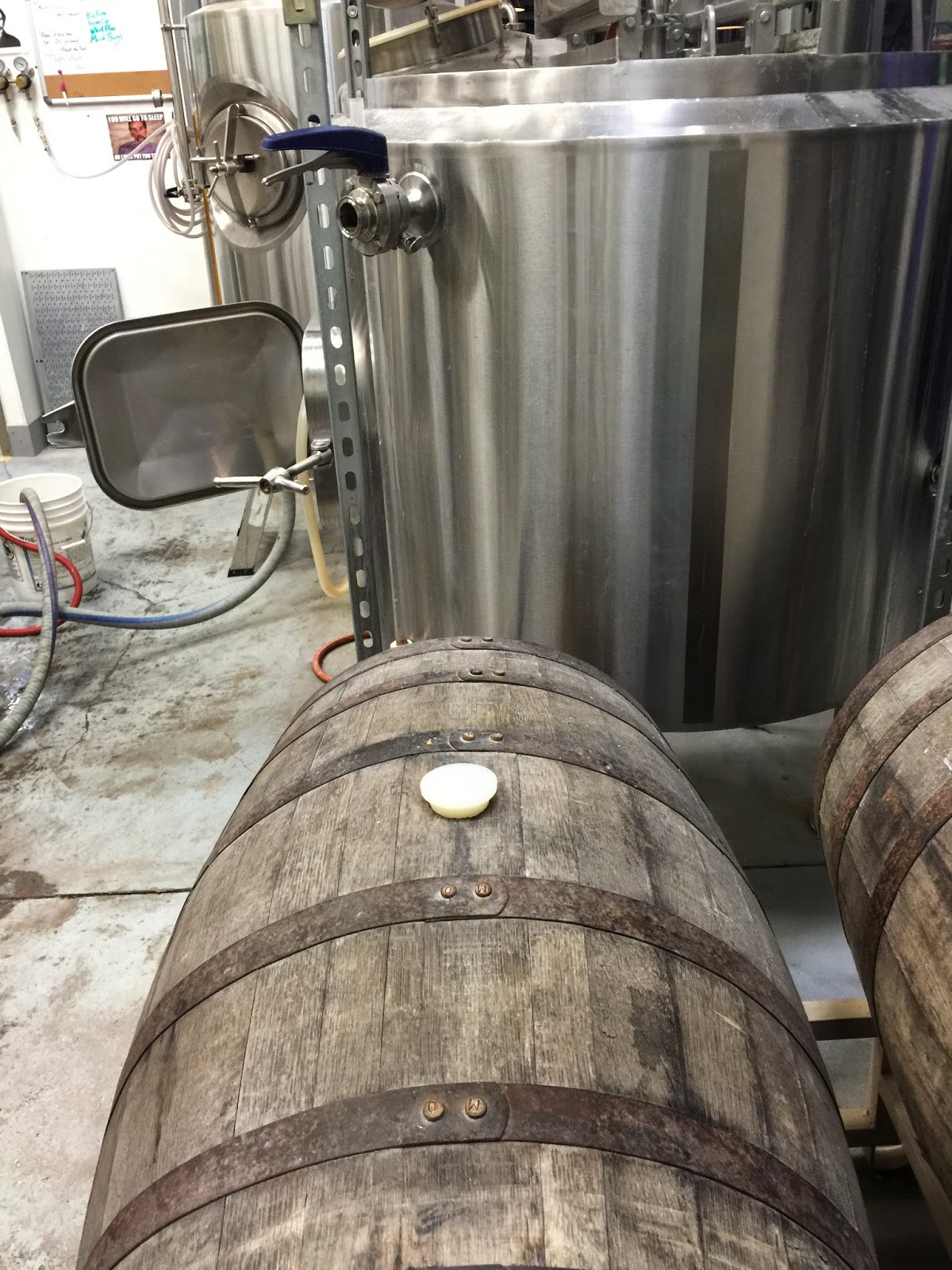 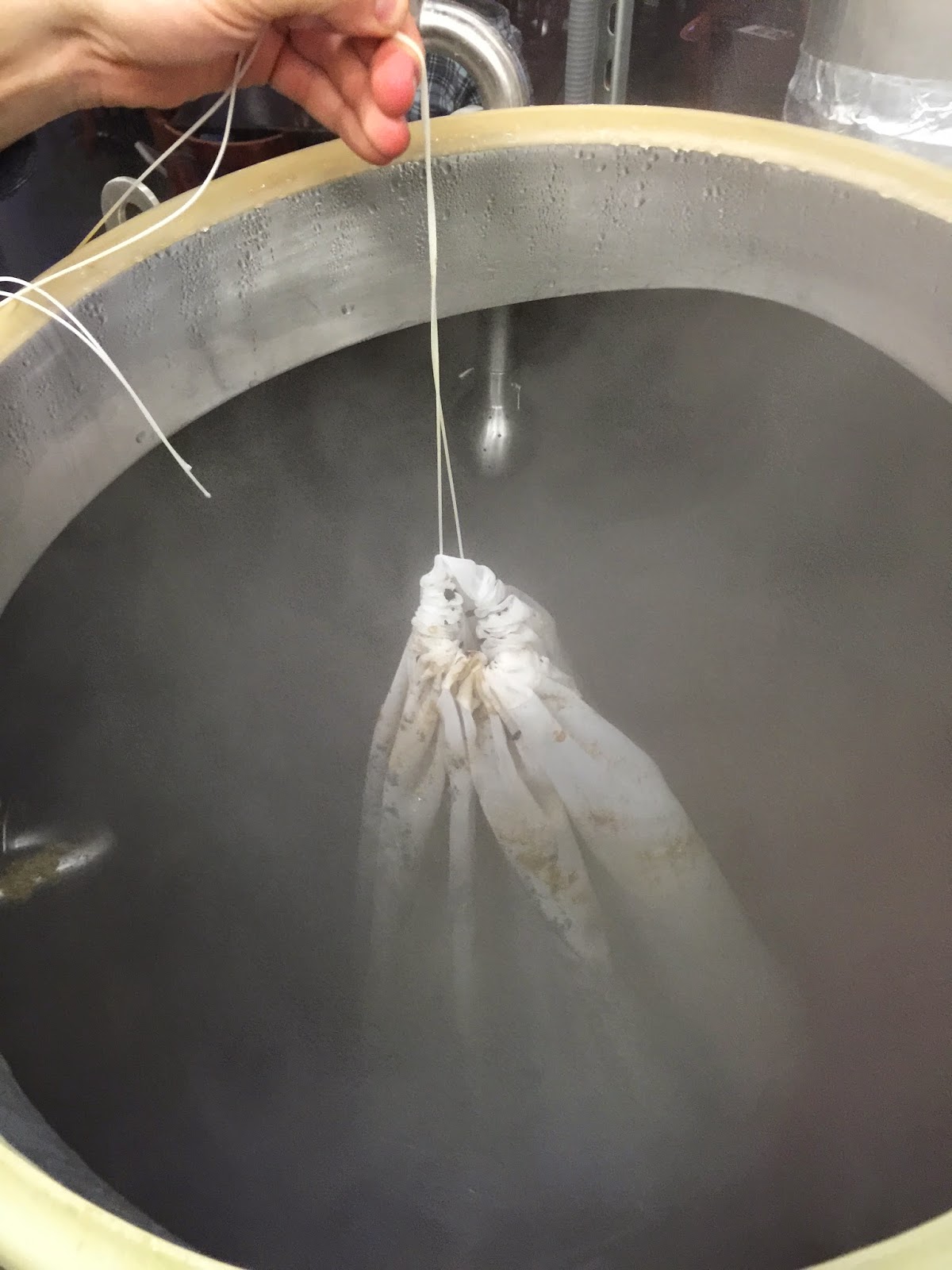 Tried flights of the following, with some great Middle-Eastern food form a nearby restaurant: 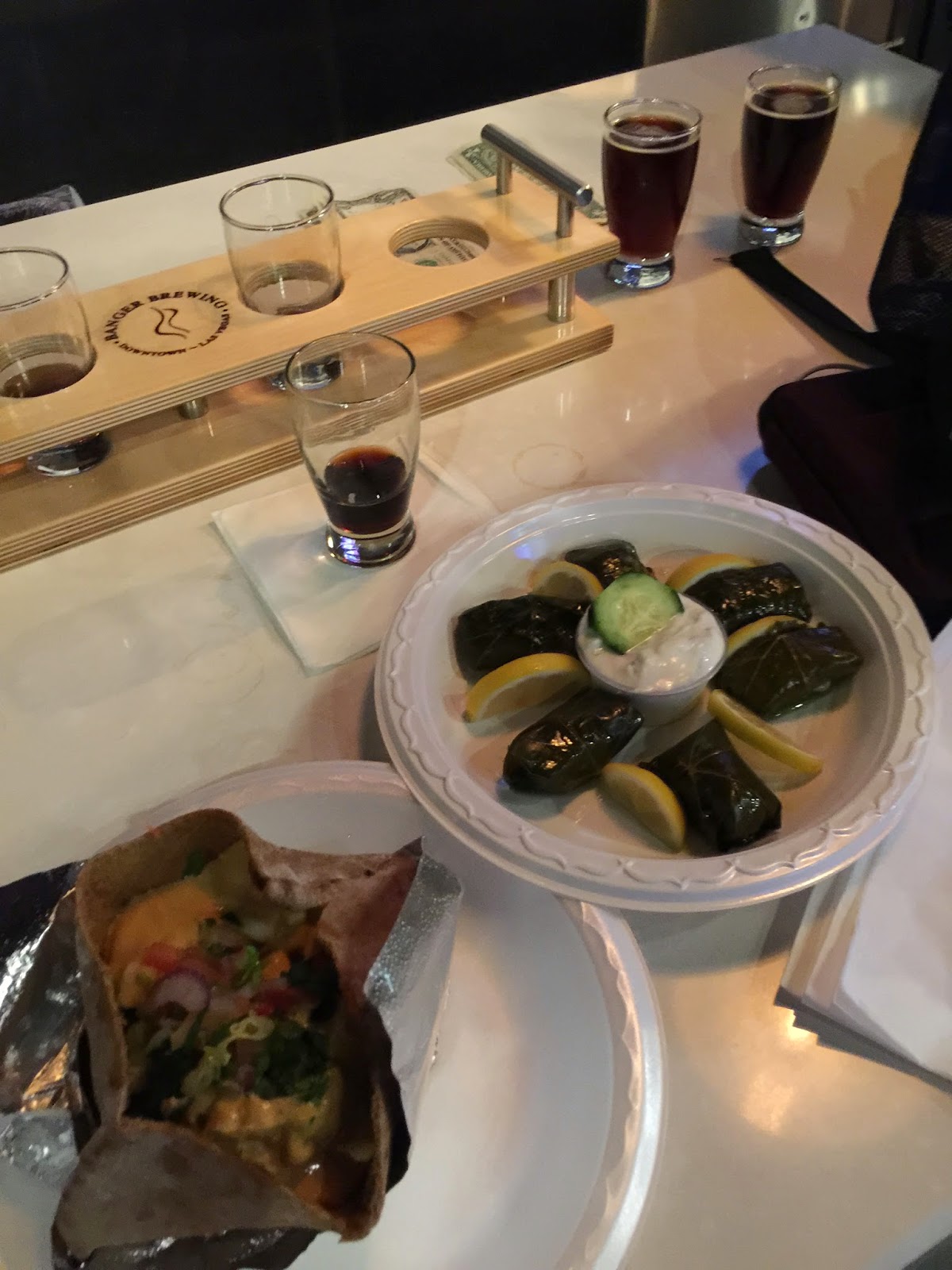 And a note to any Brewpubs or beer bars; offering flights are so appreciated by people who like to try different beers. I know it's not always possible to offer flights if you're very busy. But if you don't have them, please get them. Zythologists (woops almost typed "Xythologists") like me appreciate flights or tastings greatly.

I also suggested that a beer could be named "...I hardly knew her" as in "Banger (bang her)... I hardly knew her" which I actually first heard in Bangor, Maine sometime late last millennium. Apparently this was the first time some had heard this horrible joke, and then comments were made, such as "let's use this name for a 'blond' ale!" 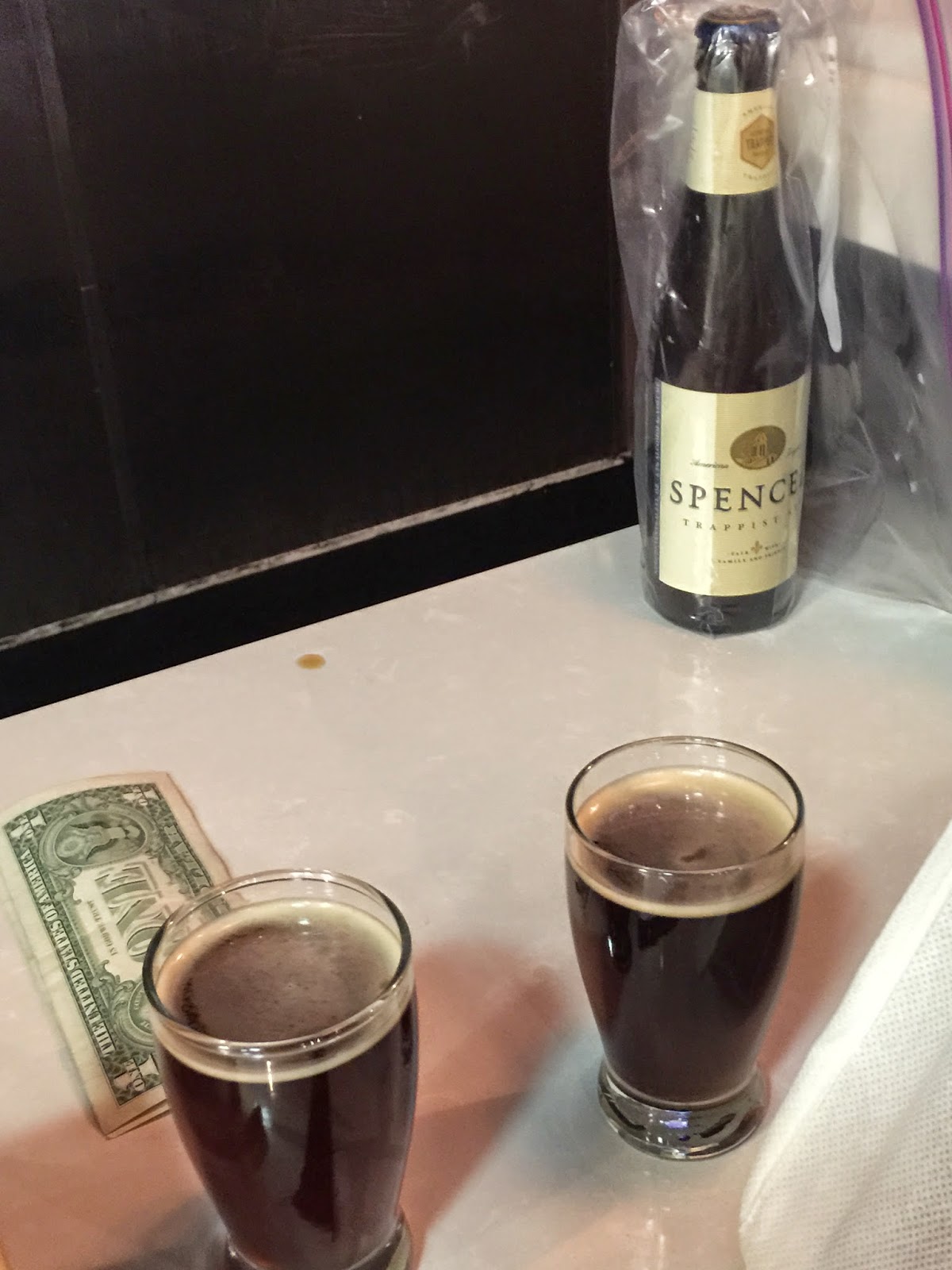 Now I usually travel with a special beer or three, in case somebody I meet wants to trade, or to just pay forward good beer Karma. I had brought a couple of Spencer Abby ales with me, the first Trappist brewery in America. The lads at Banger were almost salivating at the prospect of opening it, after letting it rest a couple hours (I hope you did let it rest). 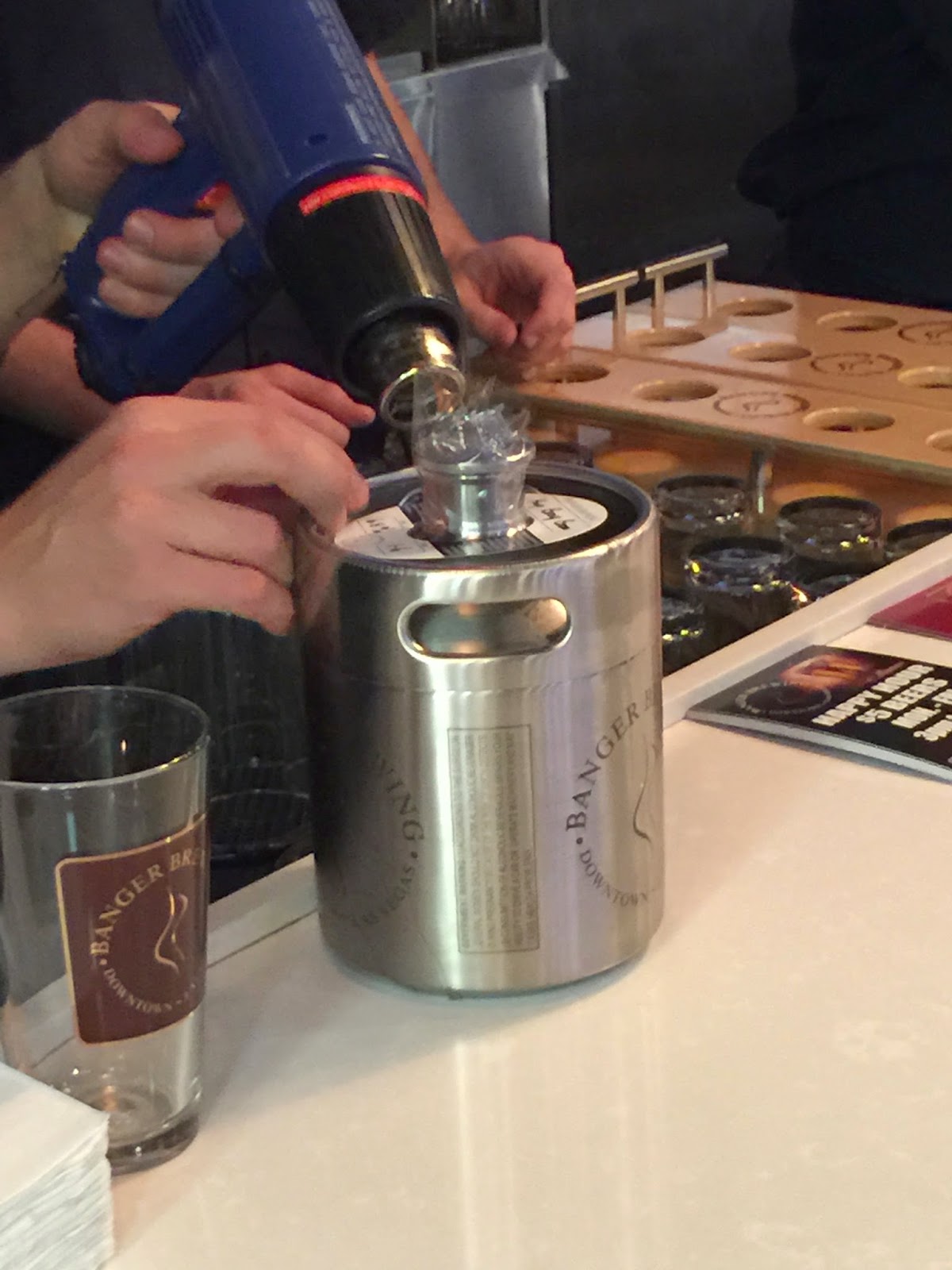 Also picked up one of the best growlers I've seen is a long time. It looks good miniature keg, and fortunately the state I live in allows growlers from any brewery to be filled at any other brewery.

I did ask if Banger would ever brew a barleywine. They did not have any plans (and none available) but I was told a brand-new brewpub had opened, which had a barleywine on tap. 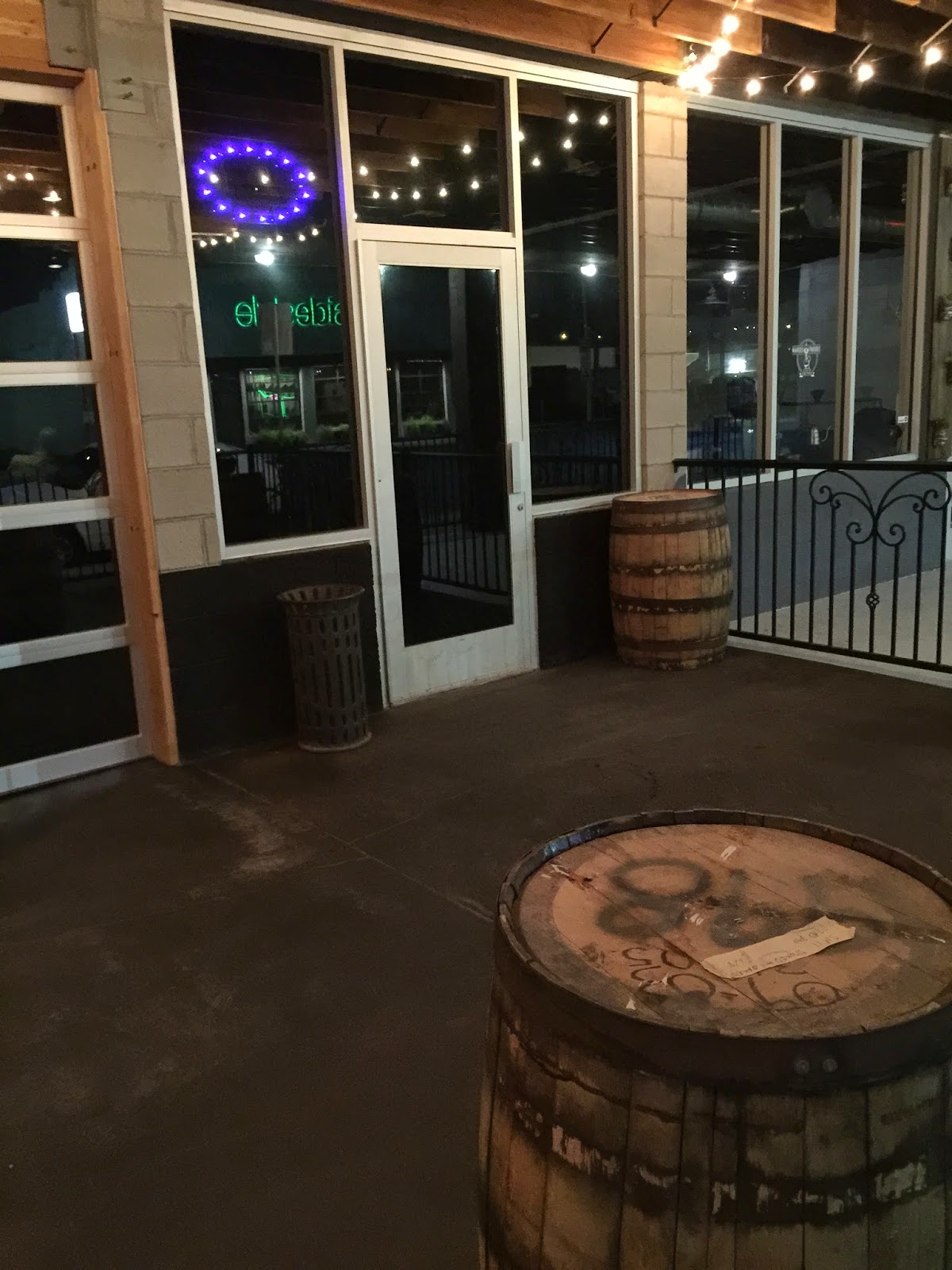 A short walk, about a mile or so, and I was there - Main and Charleston. And as the sign was not up, the directions of "look for a coffee shop and a small neon 'open' sign" was very well advised. Here I found Hop Nuts brewpub. And also here's a lesson for you, dear readers.

It really is nice and all that was Googling, beer mapping etc. all the places you can find about beer on the Web. However as this place only opened January 1, there was no way on God's green earth you would find this, unless you either a) know the area or b) talk to people. And that's my point; it is nice to use social media like Untappd, or Twitter, or Facebook. But let's not forget that "social" existed long, long before "social media" did.

The Hop Nuts brewmaster/owner Kevin seemed surprised I would walk this far for a beer, and I replied chuckling you don't know me that well. The barleywine on tap was a 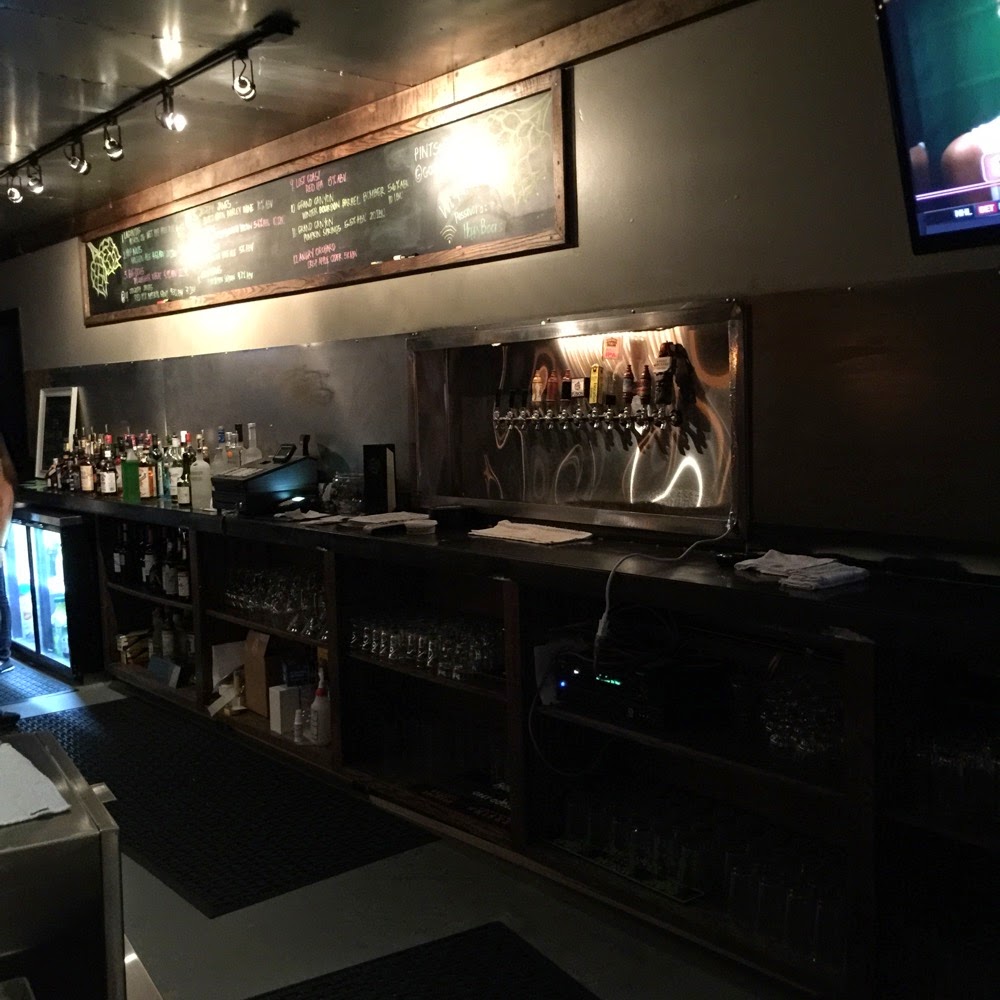 Which was rich without tasting too boozy.

After a sip or two of water, I did try their very own

Hop Nuts Golden Ale   Ale, Golden   [7.5]
which was very fresh and quite good, with some distinct maltiness. Spoke to several other people including a fellow Untappd user, who astonished me with his total beers (note I have not listed all mine on Untappd, and I make a distinction between bottle, tap, cask, etc., which Untappd sadly, does not).

Parenthetically I should add that if you don't know this, there can be small to enormous differences between same beer in a bottle, or  tap, or a gravity fed cask, or at the brewery, to name some of the storage/serving variants.

The next day had a pleasant surprise at the Freescale Semiconductor trailer. They were showing their "Internet of Things" (IOT) which included a "smart" keg scale; when near empty it contacts the distributor! I also prefer my own name for the Internet of Things; I call it Internet Devices Interconnected, of Things, or IDIOT. 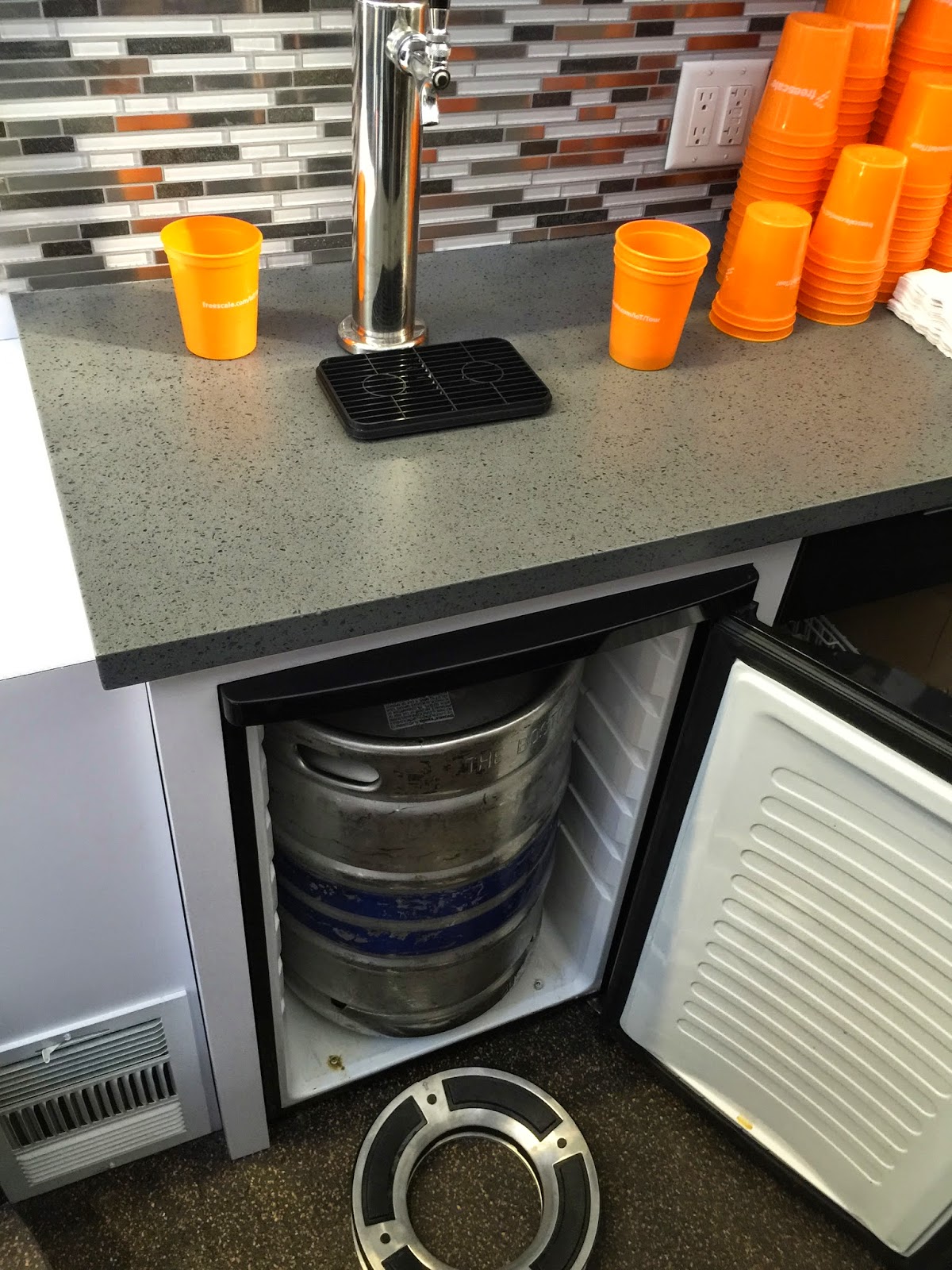 For lunch, took the monorail from the Convention Center and walked to Barley's Casino & Brewing. 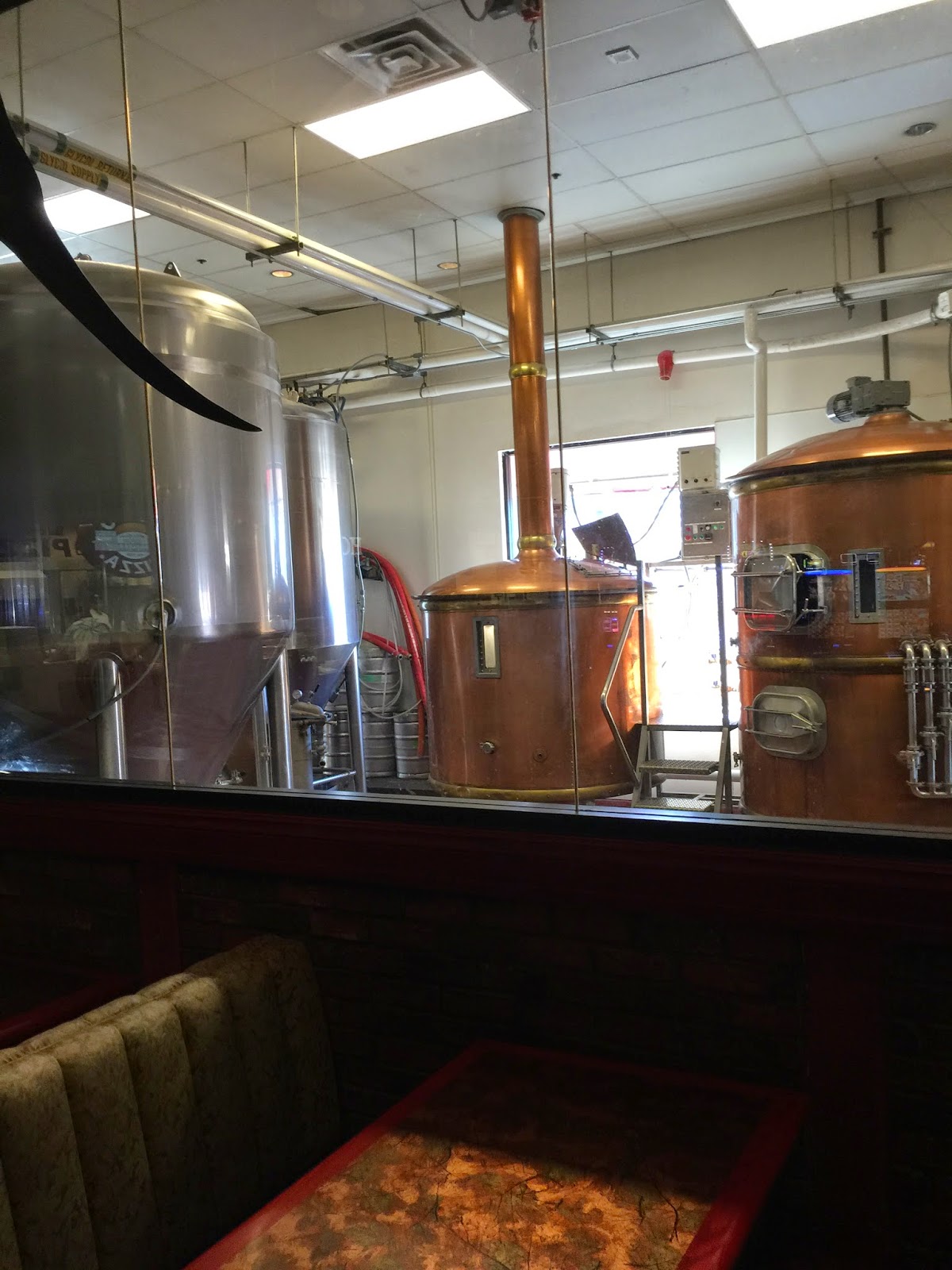 They offer tours if you just call the owner, but sadly I did not have time. Tried their 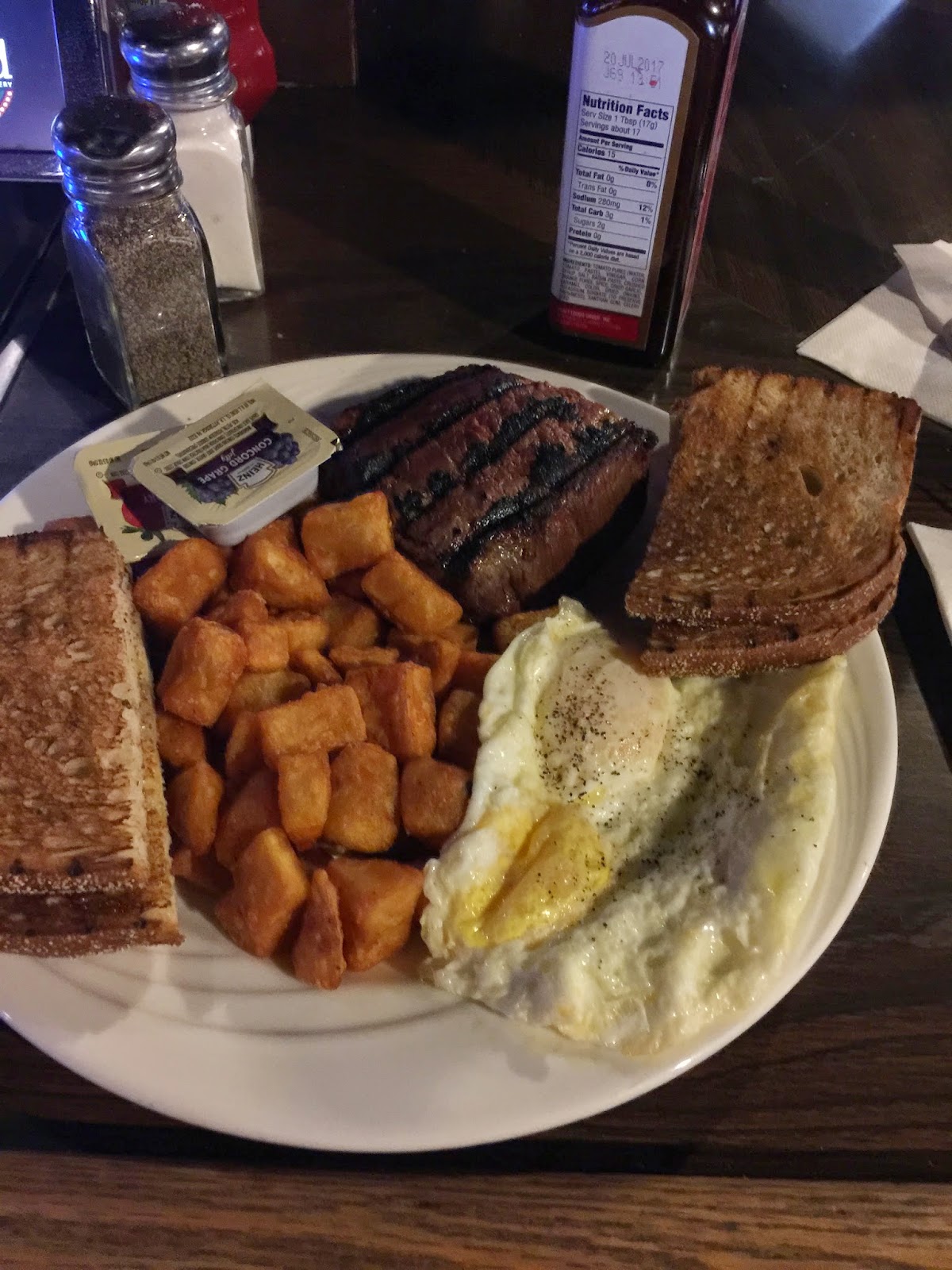 Also had a very nice steak and eggs for lunch. And of course this being Vegas, the meal appeared within about four minutes, because if you were gambling, they don't we don't waste time waiting for food! 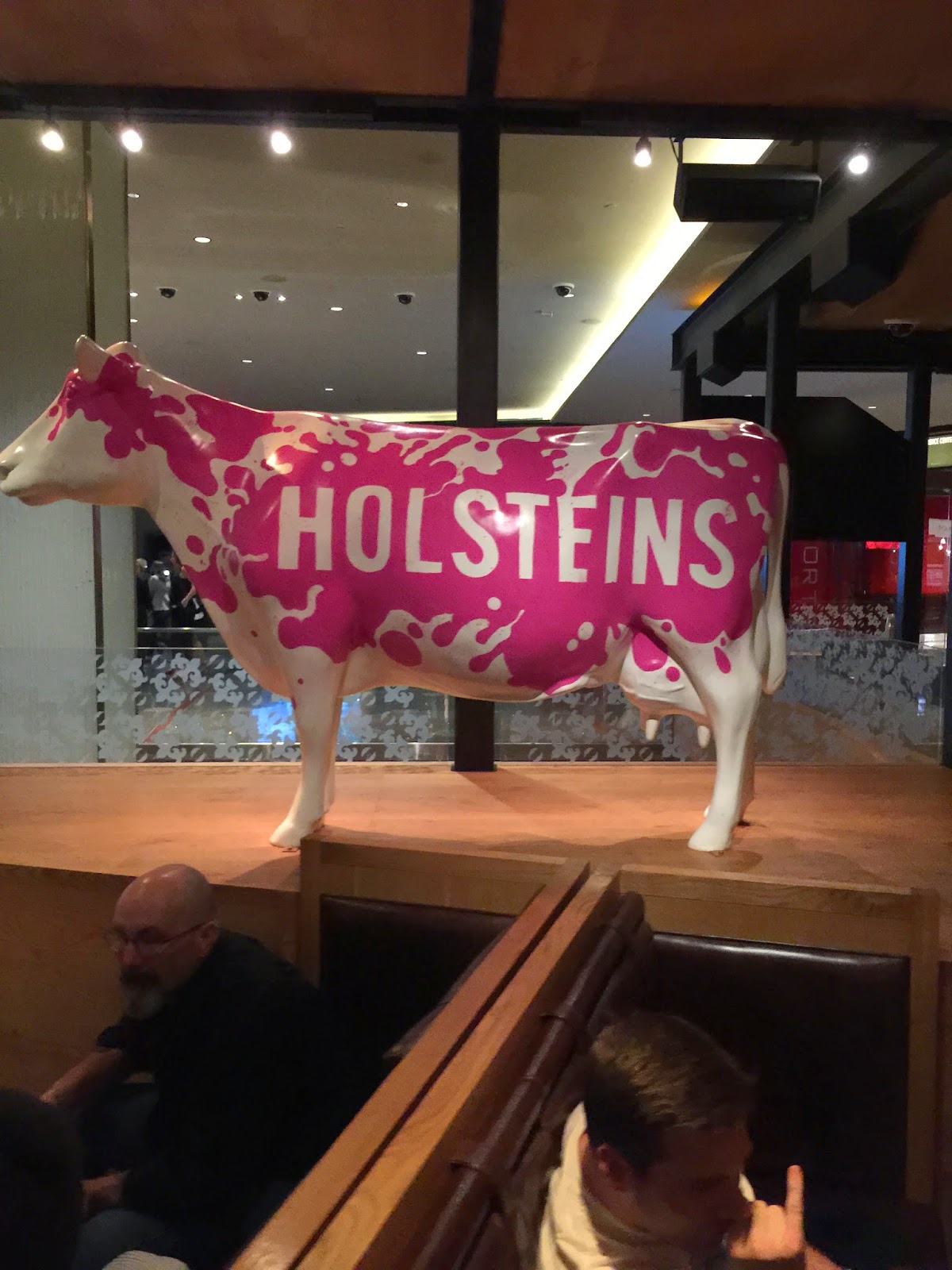 That evening I had several options; there are two places I wanted to go such as Aces and Ales which seems to have a pretty good reputation, but I did not make it there. I went to Holsteins Shakes and Buns.

Holsteins was interesting because they do offer milk shakes with alcohol, which is just fine for those that like that. However they have an extremely good beer selection; on tap, in bottles, and the special "unlisted" bottle list. As they had - shockingly - Poperings Hommelbier Belgian IPA on tap (a personal favorite) I started with a small glass of that.

Here's something to try if you know your beers, and want to strike up conversations. At least four people that evening next to me at the bar wanted something, they wanted "maybe an IPA of some kind." In every case I suggested try Hommelbeir, a sample or a glass, and if you don't like the glass I will pay for it. Not surprisingly, I had to shell out no cash. In fact, several people thought I was a rep for the brewery or distributor!

The cicerone Toshi came over and chatted a bit, suggesting what would be something good to try on the list. Now this sometimes happens so it's not super critical, but two of the more obscure beers on the list were not in stock.

Eventually settled on (which could be my new favorite beer name, instead of Mine is Bigger Than Yours from Toøl / de Proef): 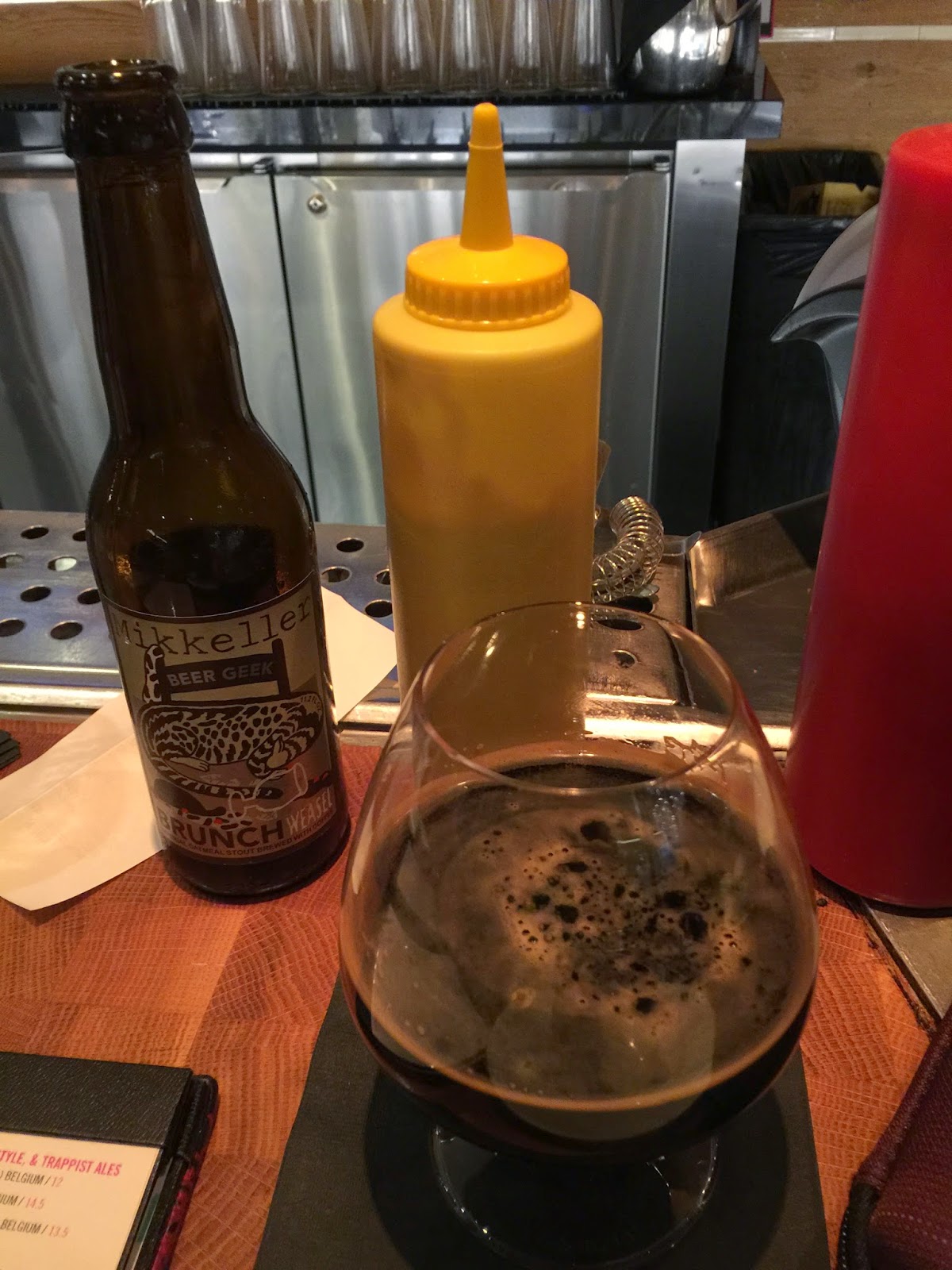 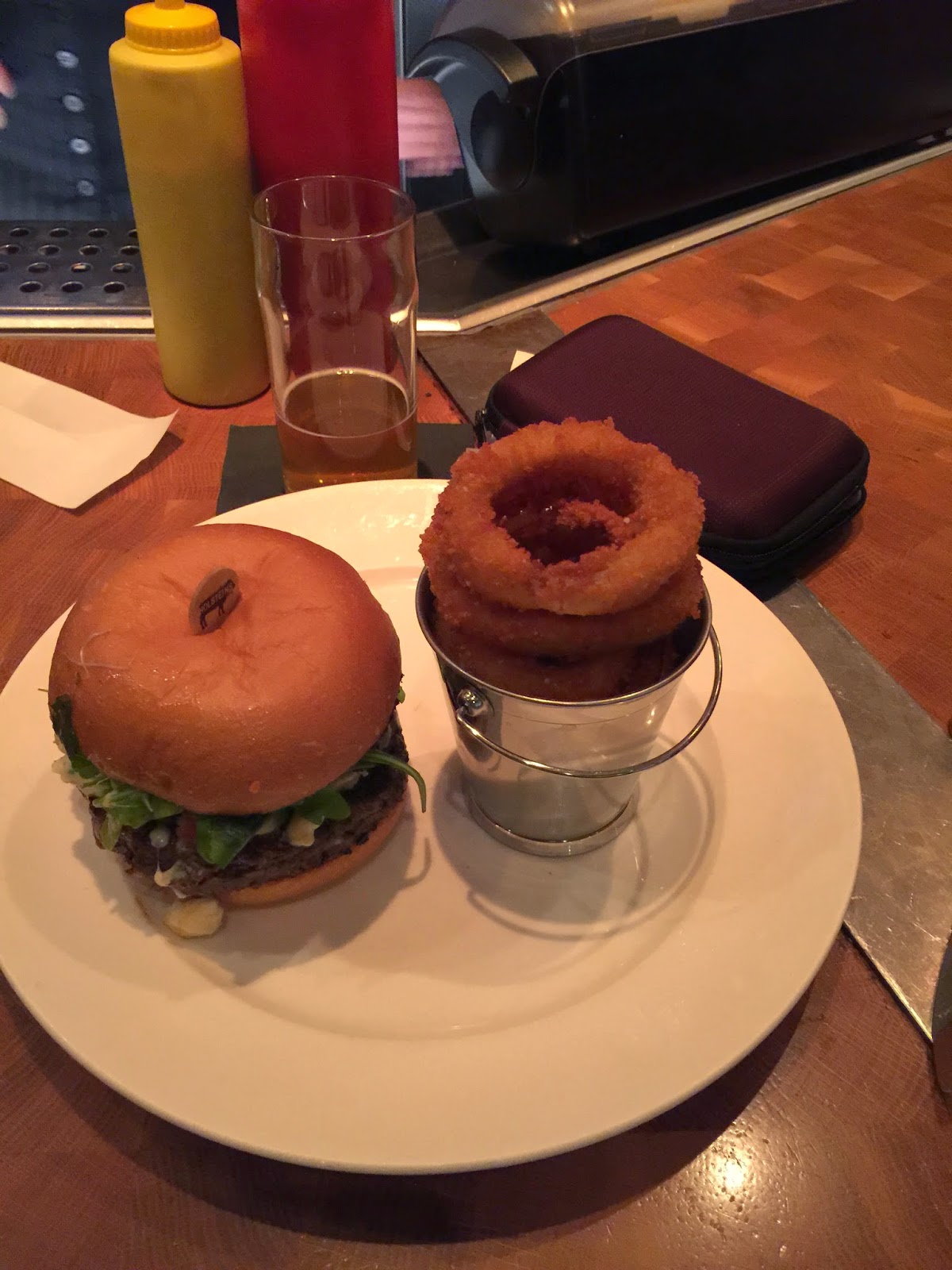 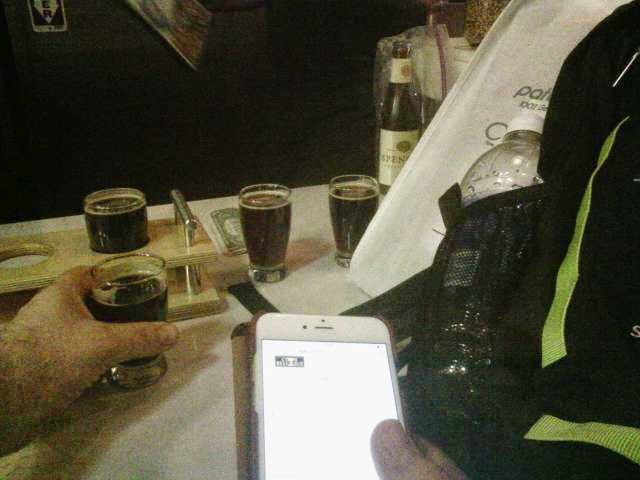 The next late afternoon was one of those kismet sort of things, because when I was in Vegas, my nephew was also in Vegas with some buddies, before his second deployment to Afghanistan. As they were staying close to Holsteins, I suggest that we just meet there once CES closed at 4:00 PM. Only he made it, as his friend was a little "under the weather."

We started with the requisite Poperinge Hommelbeir, which he was not very familiar with, but thought was extremely good. I made a comment like "you haven't seen anything yet" because were going to try some beers that you probably have never had the style of what they are; but I can just about guarantee you will like them.

After deliberation with Toshi, and choosing from a dizzying array of choices... 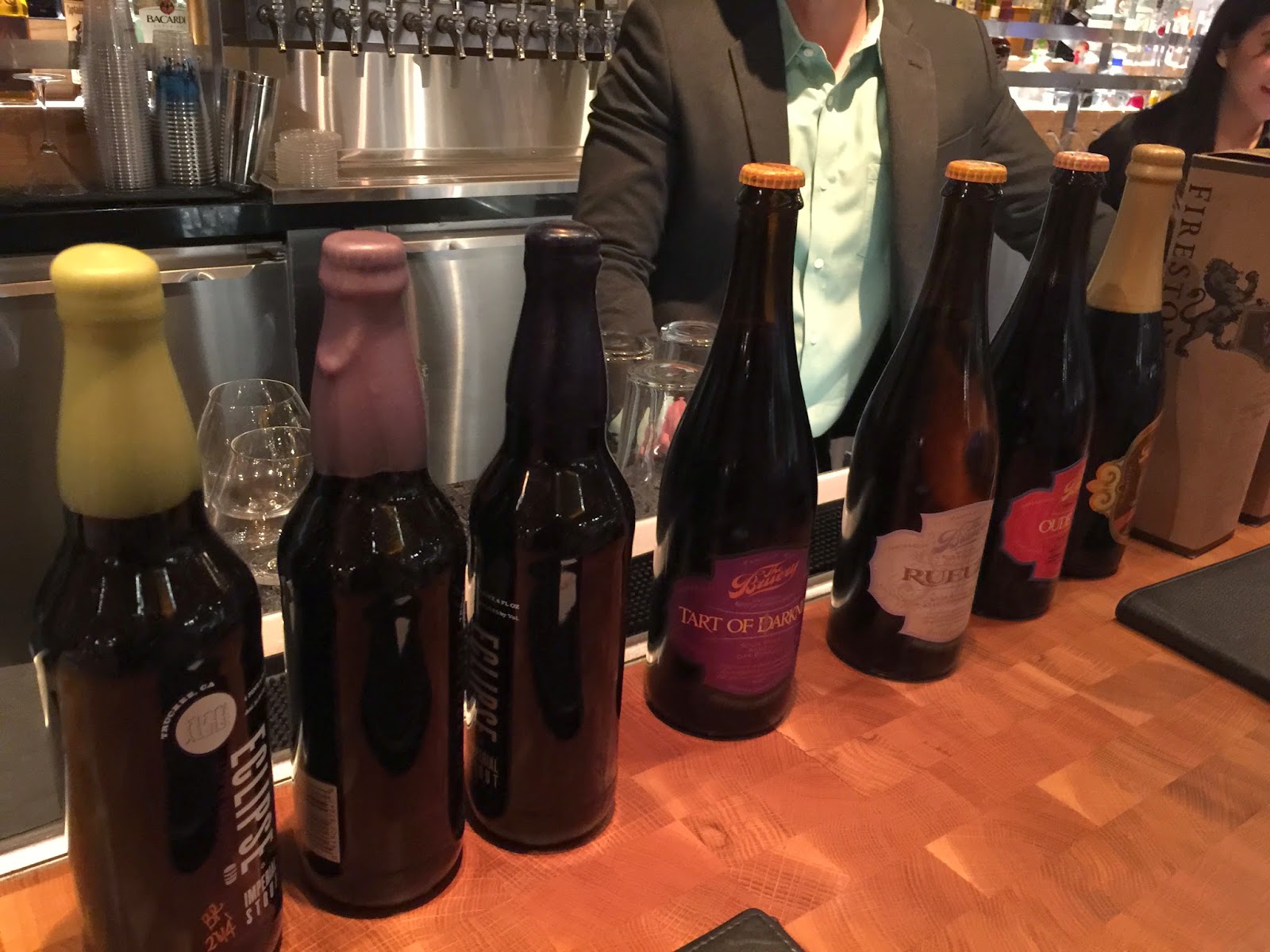 ...we settled on a Reueuze (rye gueuze). 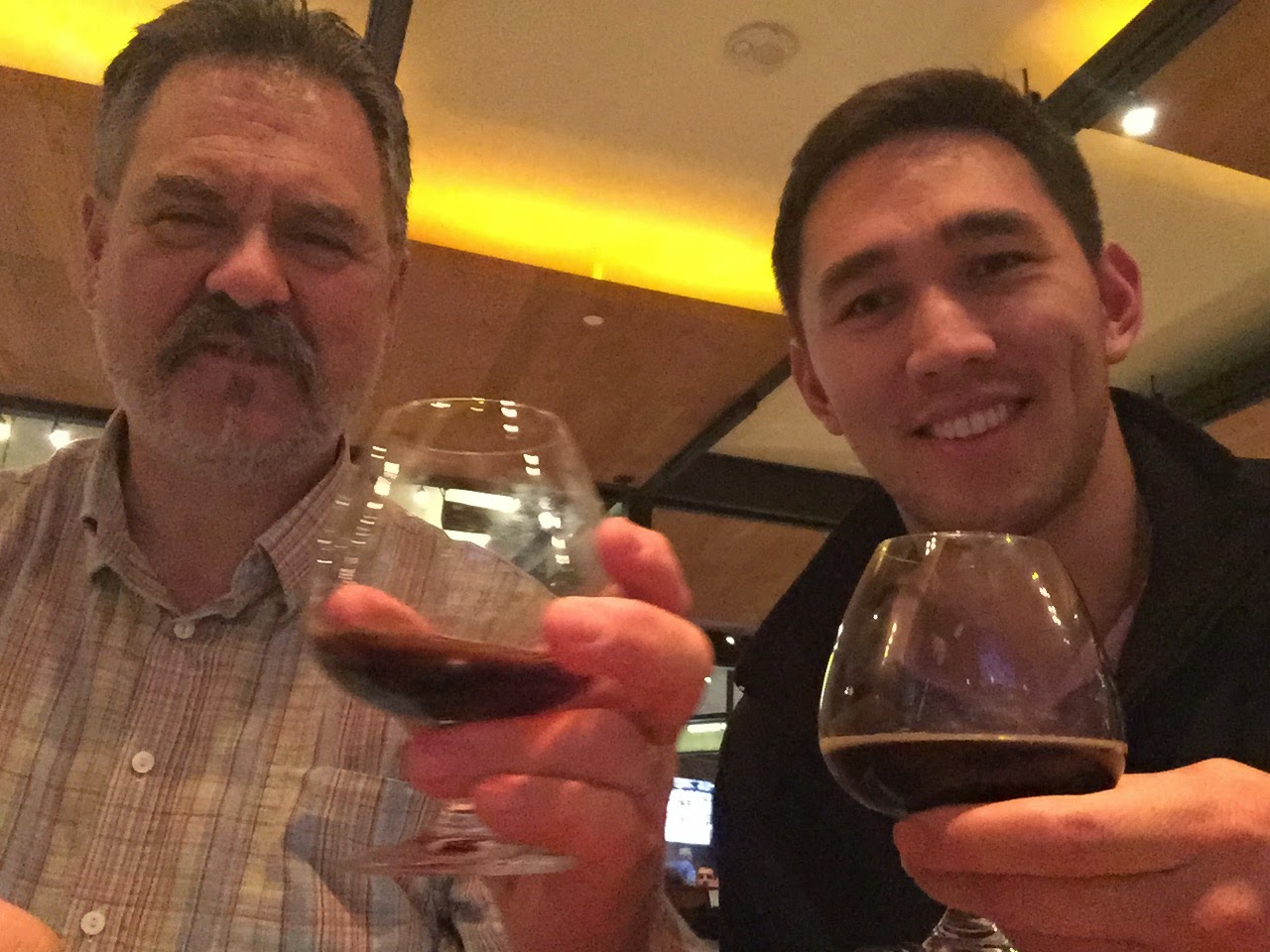 Checked with the manager Ryan to be sure the staff could in fact have a wee taste - they could, and they did.

Also surprised Toshi with a bottle of Spencer Abby as well. 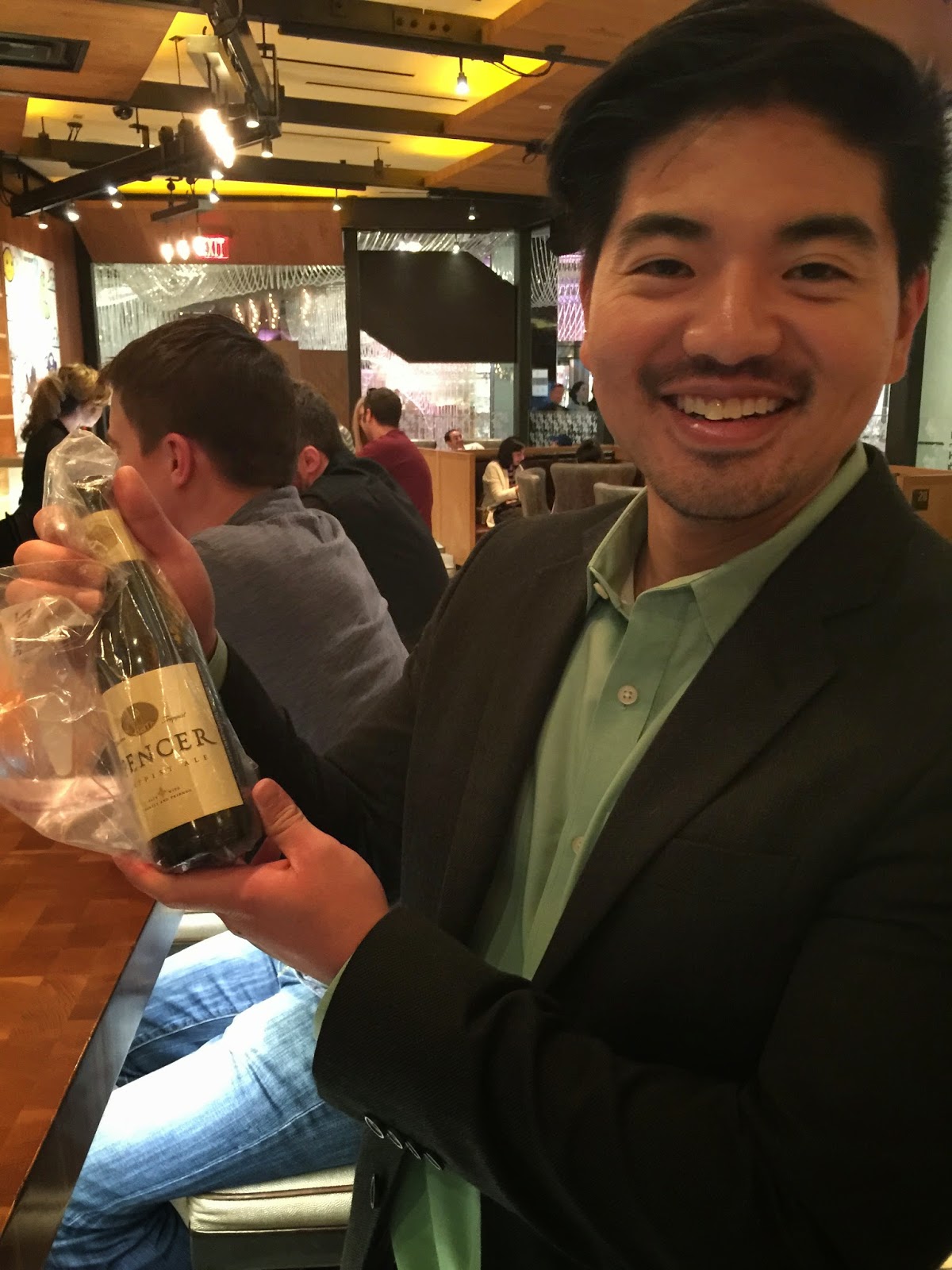 When the burgers arrived ended up having these with a 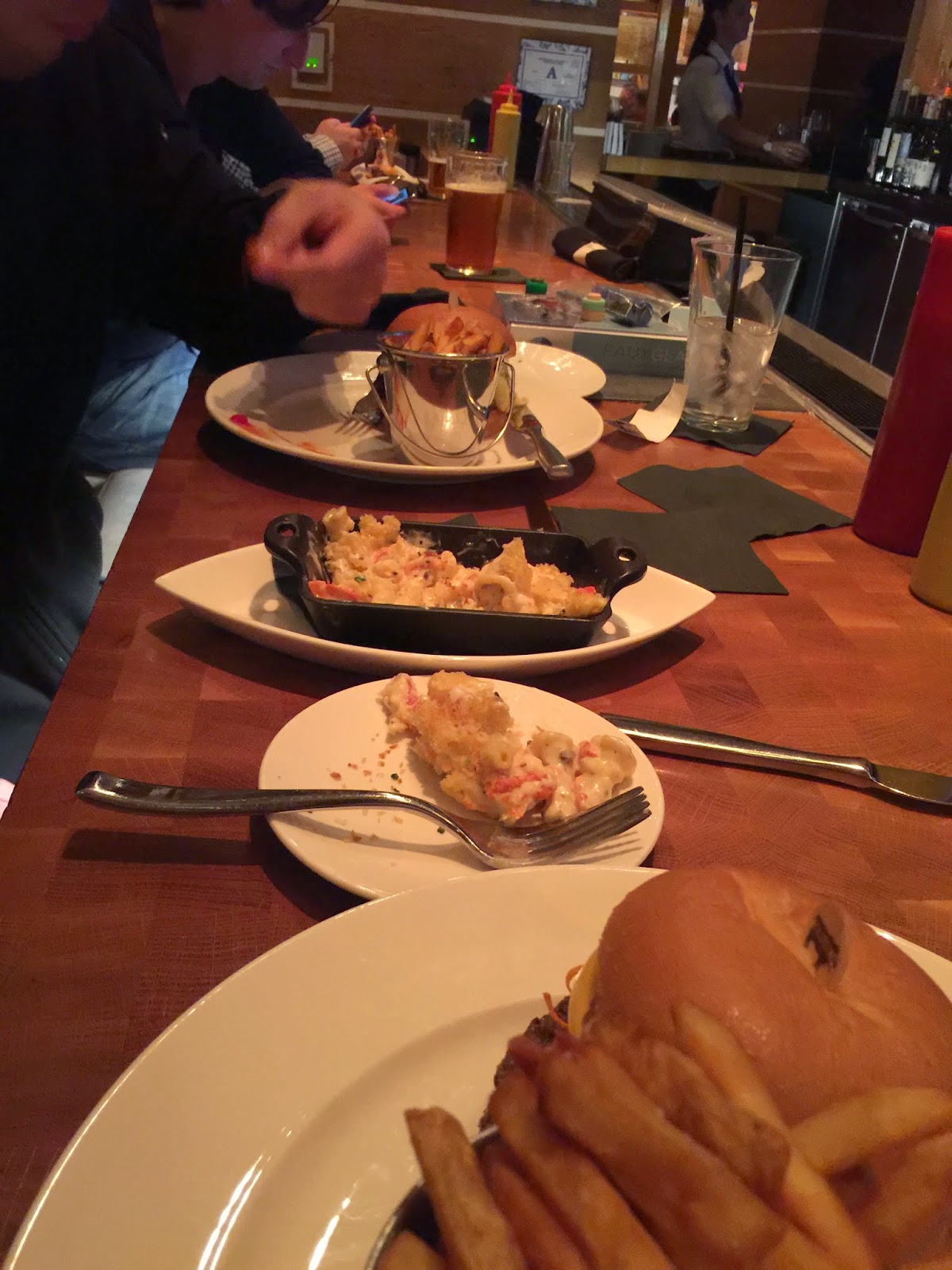 It was an early evening, as my nephew's friends wanted to meet about 7:30 PM for some more drinking and exploring, and I had a very early plane the next morning.

Next afternoon, stopped in briefly at the Jet Rock Bar Grille at the Philly airport. Had a taste of the following with lunch:

And remember, what happens in Vegas, remains in Vegas
Except the beer yeasts. They "colonize" you for about 5 days.