Ninkasa or Saint Augustine of Hippo was smiling on me today. Someone at work had asked "you like beer right, I have some 'old' beer, would you want it?"

After hearing a description, me say "Sure!!!" 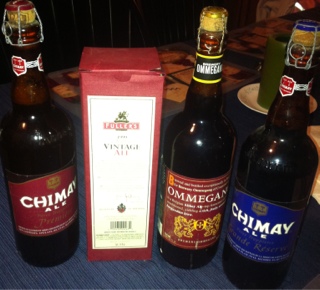 Posted by Beeriffic at 3:45 PM No comments:

After attending a high-school reunion, we were able to stop in at the Northampton MA brewpub 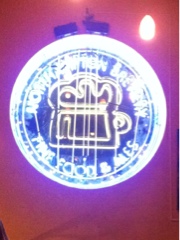 Mexican Food, and, What Else?

There are many, many food and beer pairings out there: mussels with ale (ideally at Monk's); hotdogs/hamburgers with light lagers like Bud and Miller; but perhaps nothing goes together better than Mexican food and beer.

One might say this, for if you were to sample a variety of beer types, Mexican food offers - with all it's permutations - spicy (obviously), savory, sweet, sour, crunchy, soft, rich, etc.

So was yesterday, where we had a few friends over; nothing special, just some good home-cooked food and excellent beers.

Fortunately my wife, being an excellent cook, set up a repast ranging from vegetarian squash soup to homemade guacamole. Now she is not of Mexican descent, but one could put her guac up against anyone else's.

Besides three friends, our younger son had two classmates over, and our eldest had stopped in from college; so what looked like a lot of food - in the final analysis - was "about right".

Atypical for some of the beer tastings I have hosted (and this really wasn't one, per se) as it was a small group we all used "real" glasses as opposed to plastic cups. I of course used my favorite Hommeil Beer glass. 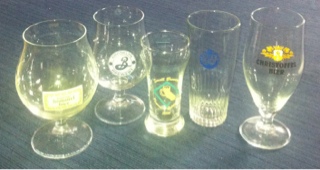 As luck would have it, Rich brought both a
Stone - Arrogant Bastard and a
Lagunitas - Lucky 13 Alt

As a way of thanking him, I gave him all the bottle caps I had acquired over the years. He was in need of beer bottle caps, as someone he knows is making a beer bottle cap tabletop. Wow, wish I thought of that, but as that has a very low "WAF" I just figured, here take the caps.

Now the Lucky 13 was an unexpected treat; I have had it before - both in bottle and at the brewery - and it is spectacular. It is also rare, being brewed for Lagunitas's 13th anniversary (and yes, I meant to use "s's" as the possessive of a proper name).

We had thought Erin had a strong wheat allergy, so she was given a very small glass, from the 2002 Small Brewers Festival in California; however she made it clear she wanted a slightly larger glass!

Both the Arrogant Bastard and Lucky 13 were very popular, and I believe everyone (me included) appreciated the fact that there will be no more. The Athos was personally brought back from the brewery, and it was a nice mild Belgian Golden ale. The imperial stout - which is what a good beer tasting should do - made Craig ask "why imperial", what make it that?

The kriek - or more accurately - "kriek in a can" was quite good, considering. It too had been picked up in Belgium; I mean who can resist a small cute can of kriek?

The last two beers were perhaps the most interesting. Being a Flemish "wild ale" the brewing benefits from spontaneous fermentation, using wild years in the Flanders area. And as an FYI - the brewery name is a reference to Dirk Naudts - the Prof(esseur).

The Stille Nacht (still night) is ostensibly a Christmas ale, but there is no reason not to enjoy it any time. Although you may not easily find 8-year old bottles, rest assured this is one beer that get better with age. Although it can be almost dangerously pressurized...

For dessert, it was season-appropriate to have pumpkin spice cookies.
Posted by Beeriffic at 2:28 PM No comments: