Today was a very long, hot day, but it was also replete with good food and drink, and a good deed.

We woke up in Kehl Germany, across the Rhine from Strasbourg France. 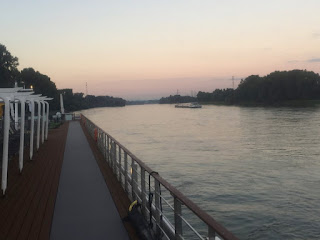 Strasbourg is a medieval city with a surprising number of canals and waterways. We had a bus tour through it, then had our own time for about 1 hour. 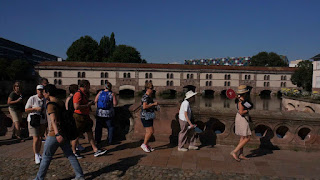 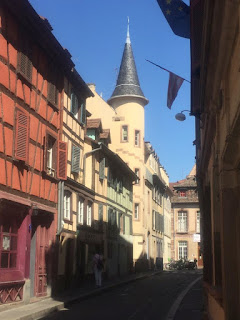 We split up, so that we could see more of the city, and I could try some beer. Unfortunately, the 12 Apostles (near the main cathedral) and La Lanterne were closed. 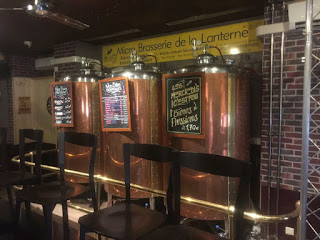 Actually the latter was open for restocking, but no beer until 4 PM! I did ask politely in French, but told remorsefully that no beers until then.

They did tell of another place open maintenant - Au Brasseur - that was not on my list. However, in looking at the map on CityMaps2Go ( a great utility where you pre-download maps, no data charges!) a quick mental calculation said that there was no way one could get from here to there and back here to meet up with the tour group. 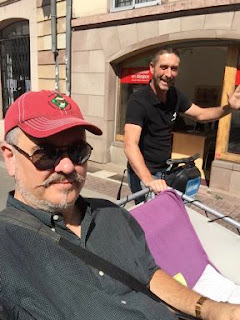 Then like an angel from heaven, a gentleman from Vélo-Taxi stopped by. A very quick ride for a reasonable 10 Euros (as in "it's hot and I'm obviously a tourist and I don't really care") and it was beer time. Tried the

I did explain to the waitress in my basic French that I understand that good beer - like wine - should be savored, but time was not a luxury I had. Met back up with the tour group with minutes to spare. Also note there was a faint sulfurous hint from the beer; this was not a defect, nor an infection - the water in the area is high in sulfides. 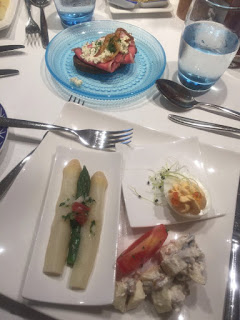 It was back for lunch, then a bus tour of Obernai and a winery visit. And by "lunch" I mean a fantastic repast, as the pre-lunch snack of white and green asparagus with salmon caviar deviled eggs indicates! 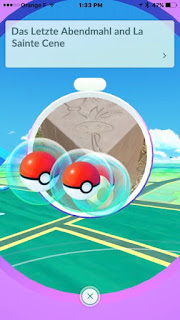 An interesting diversion was that - although not released in the EU yet, there were plenty of Pokemon landmarks, for those who play the game for iOS and Android. 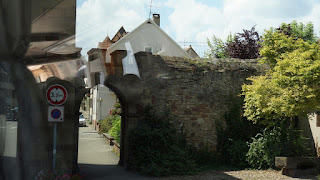 Getting through Obernai was a trick, as the old city gates just barely allow a motor coach! At the city center we saw a lot of older architecture; and had time for one beer. 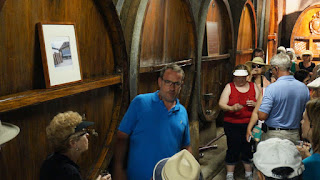 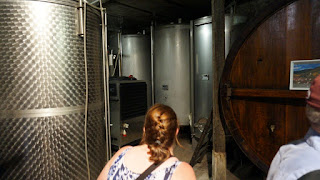 We toured the vinery of Zeyssolff, which also included tastings of their Riesling, Muscat, Pinot Greegio Pink, and Gewurtz. Bought a couple of bottles as well as a whiskey from Armagnac! 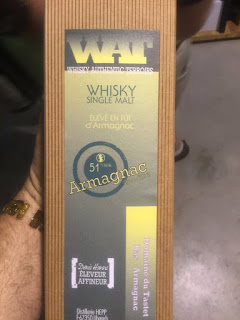 The owner and the guide both admonished us that the limit for USA (as 80%+ of those on the tour were from America) was 3 bottles. I did mention that I think that's a gift limit for non-USA visitors. I later confirmed and emailed the winery that the stated US customs limit is a case of wine (typically 12 bottles). You could be taxed, but if it's for personal consumption, and a mixed case, it's highly unlikely.

Back to the ship for a quick shower and dinner. Sat with two sisters from PA, and a couple who had moved from the UK to Australia.  As a nightcap had a