Note due to connection speed etc. pictures may not be posted until later!
Started out after a good night's rest, with a German-influenced breakfast of meat, cheese, bread and fruit. Also met a couple from AZ (Lisa and Craig) who wer eon the same cruise.

Walked down to the street Mittlere Brücke to get some pictures of the Rhine from the bridge. Seeing several color-coded trams in the area, we figured let's get on one and see where it goes.

Unfortunately, the one we chose - the green tram - kind made a short loop and stopped back where we had gotten on, but facing the other direction. So we got off and took a yellow tram to see where it took us. We took it through some of the city on the east bank, then looping back towards the main train station.

This was also near a pre-defined "beer spot" known as "Drinks of the World." Not a beer bar, but a beer store with a dizzying array of beer, especially strong in the American craft selection. Picked up three to either enjoy later or to bring home, depending on my resolve. 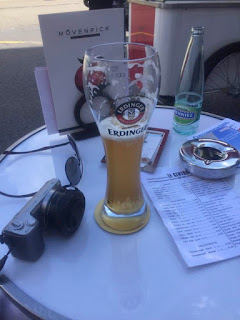 The funny thing here was in asking the waiter for a "toiletten," was directed to a sign that led to a door that led to another door that led to... the main train station. There was no bathroom sign, so decided to just leave. We went on a yellow tram heading the other way, thinking (quite incorrectly) that this would re-trace the path we took previously. As we approached the zoo, leaving town, we decided to get off; and read the tram signage. Apparently it's not just color, it's also tram number that matters. So back to the main train station, to the correct tram to get back to Schifflände stop.

From there it was a short walk to Bierstube zum Stadkeller, which was supposed to be a very good restaurant, and it was. 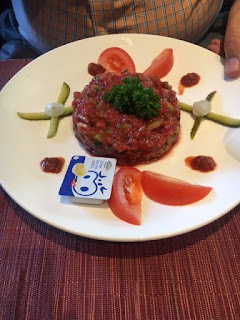 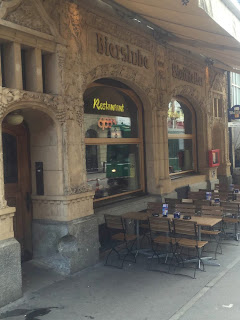 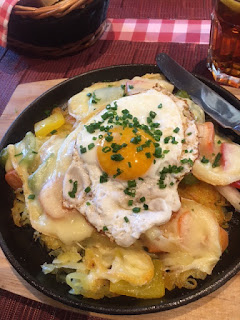 While there, decided to use the toiletten, and was directed by a sign to a door, which was not a sign to a door, but an elevator. Fearing a repeat of before, entered with some trepidation and found the bathrooms were indeed down a few floors.

After that, to the Xocolatl chocolate shop, which to a chocaholic like CR, it was heaven. Did a brief facebook post about her being lost, and a few minutes later the owner cam out and said someting like "a good place to be lost" - the power of social media!

From there it was back to the hotel, to claim our luggage; thence to the Viking Lofn. This is a nice ship; it is relatively new, and designed from the ground up as a river cruise ship; small draft, lots of room, even the cabins, although compact, were very efficiently laid out. 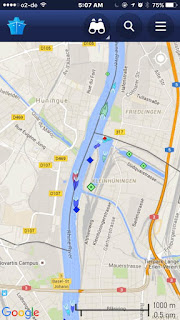 Went to the bar to check the basic beer selection, and chatted with Peter from Slovakia. Very nice guy, and wanted to speak with us later about places to see in his native country, should we ever visit there.

The orientation was funny and informative, and people are very friendly. This is definitely an "all child left behind" cruise, with the bell curve for age centered I'd guess around 68 or so.

The dinner was fantastic, a dazzling array of choices, with wine included. Drinks are not included in the price, so may have to check what the price per beer is; the "Silver Package" may be cheaper in the long run. We sat with two good friends who go on trips together sometime: Maria from GA and Veanna from TX, and Laura from KY; and in that "it's a small world after all" sort of thing, Veanna and Laura had been on a cruise in Italy a couple of years ago! 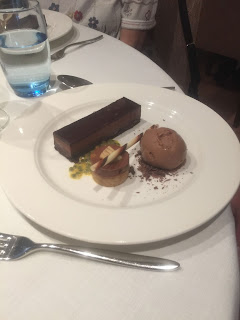 Now about that rented a WiFi hotspot; some of the blame for non-functioning is mine (and the revised review on FaceBook reflects that). As it stopped working unexpectedly the second morning, and finding the company worked 8:00-5:00 PST, with no 24/7 support - I decided to reset the unit, and re-enter the APN values again. It didn't work, in that it was apparently connecting to my iPhone, but not connecting to get data.

Did get the unit working again, and here is what happened; I'd say mostly my fault, but with two unknowns. The first real unknown is why did it stop after one day? Don't know. However, when I reset it, I manually added the APN required, and spelled "vodafone" as "vodaphone"! Okay my bad 100%.

However, I also found when resetting the unit - which retains all info such as password, ID, etc., the data plan resets to 1 megabyte per day.
Yep, just 1.

Once I bumped that up, the unit worked fine. Did chat with a really pleasant tech support person, and did mention that
1) their product offerings and price was what attracted me; but frankly had I noted  the limited hours of operation, I might have gone elsewhere