There's something about Texas that a lot of people really like: be it the food; the cultures; the history. There's also beer. 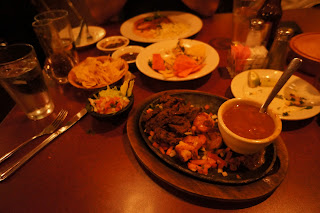 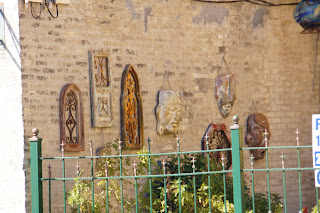 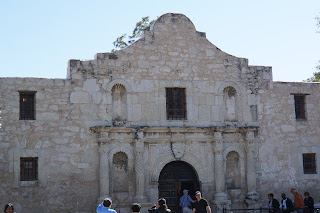 Arriving late afternoon, the first order of business was to head out to some of the better beer bars. Note a New England hurricane had been narrowly avoided! 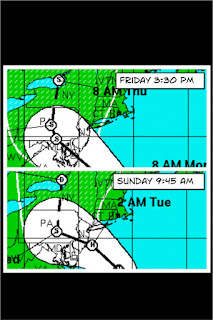 First stop was The Esquire, which had some good recommendations from various beer websites. 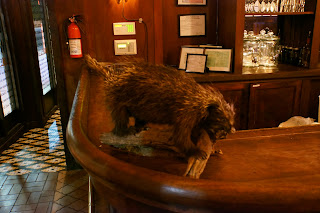 The chili fries were a great appetizer, and service was prompt and friendly. 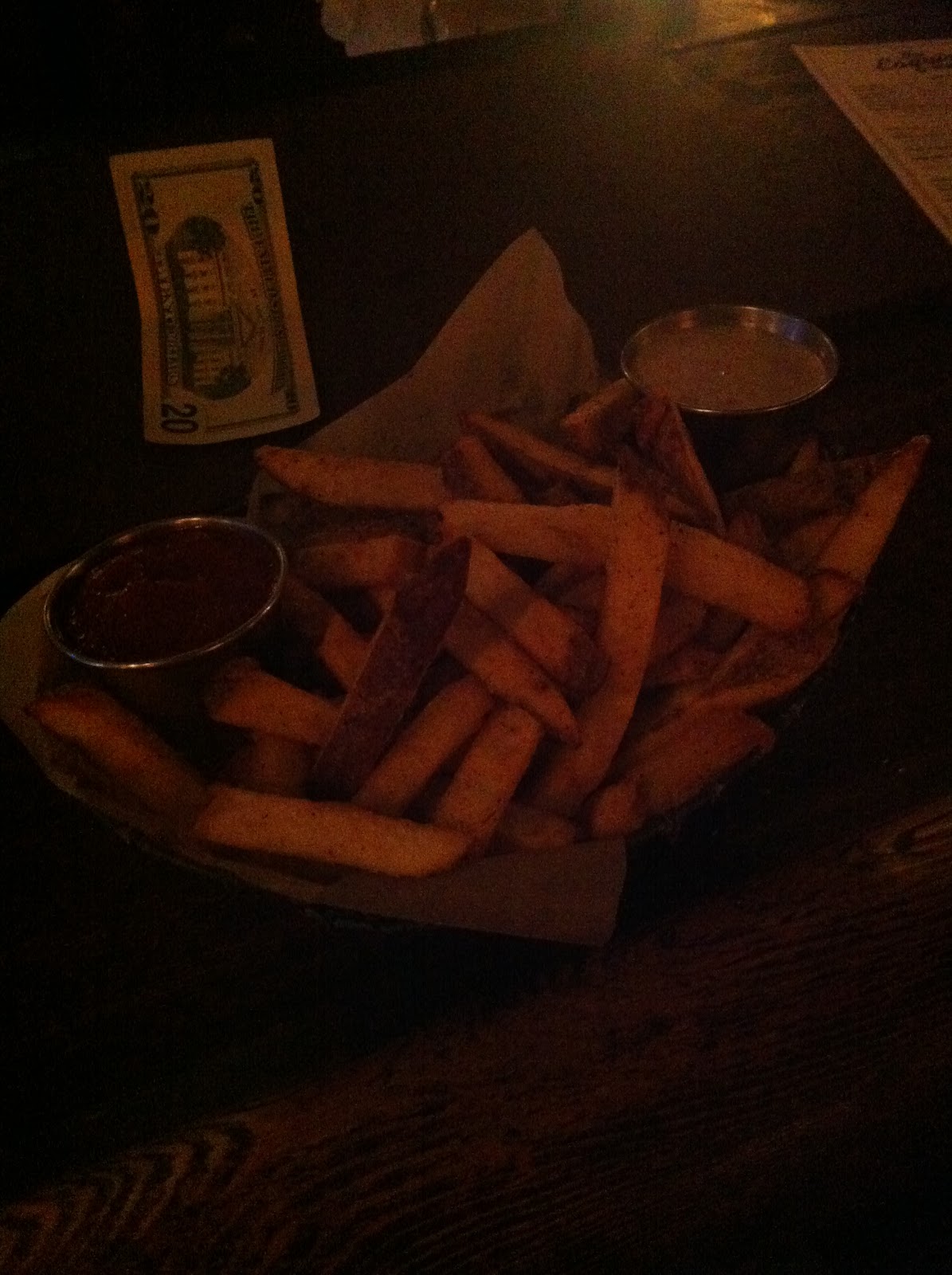 However, most of the local brews on tap were "out"! Tried: 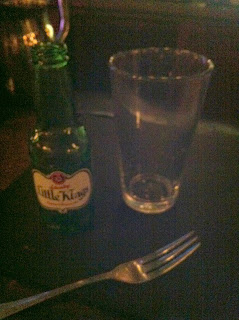 That was about it, as the zombies were out for Halloween; 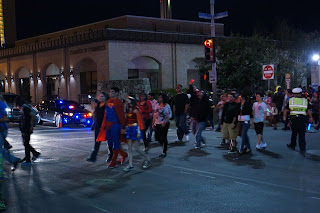 I knew they were people in makeup, but it was a but scary nonetheless.

Monday - 10/29 - tried to find several local beer bars and a brewery within a 1-mile walk. The bars were closed until 3 PM, based on some local beer establishment laws; the brewery was closed on Mondays

Stopped in at Lüke which boasted an amazing menu. Too bad an earlier sausage po-boy from the fantastic Lagniappe food truck had assuaged my hunger. 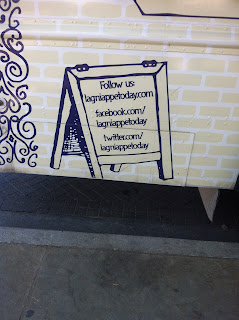 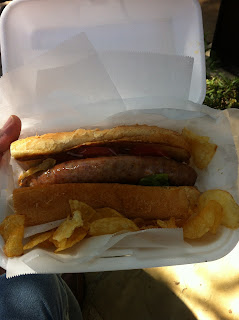 At Lüke tried an: 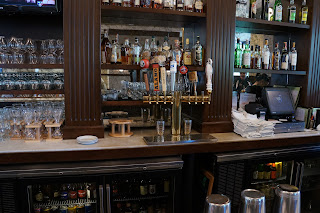 The manger Jason let me sample:

Jason seemed very knowledgable about beers and proper beer/food pairings. Apparently there's a lot of stuff planned with future beer/food events. The selection of beers was quite eclectic, and I promised to come back the next afternoon for the $0.50 oyster raw bar. 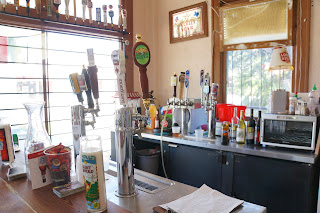 Made it to the Filling Station Tap Room on S. Saint Mary's St, as they are not open until 3. It's a quaint place to try some good beers. It's also next to what seemed like a nice restaurant, although there was no opportunity to try the food. 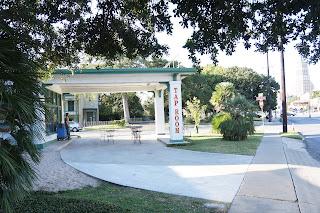 The bartender Jarvis was a good host, and told the story how the restaurant expanded and had this space left over; the Tap Room is new in 2012. Good selection of beers from as Far East as Brooklyn Brewing and as far west as Green Flash.

Note that given the size of the place (no room for a dishwasher) they use plastic cups; no big deal [remember all cans are plastic-lined] but be aware. Looks like a great place to grab some food from next door, sit on the patio, and watch the afternoon roll by. Met the owner as well (forgot his name - sorry) and complimented him on his place and wished him good luck. 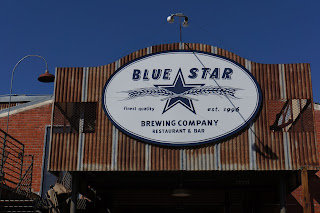 On October 30th, made it down to Blue Star Brewing which was closed on Monday. The brewery prides itself as "pretty much everything" is organic; as part of I guess a full disclosure the bartender wasn't sure about all the hops. 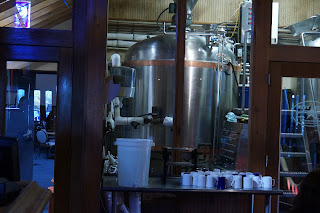 Chatted for a while with a local retiree, who related a story of a recent local church dedication, where all religions were there to celebrate together - Christians, Jews, Muslims, Buddists, etc; why only in Texas? 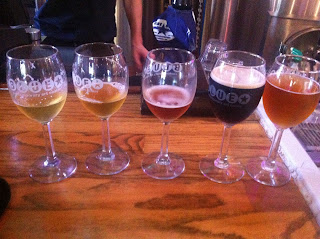 The beer flight offered was tastefully served in stem glasses. From left to right (although not sampled in that order) was:

Note that while the Cornfed IPA and the Extra Pale were standouts, the "Scotch" ale was not really "Scotch style". When asked what I thought of it, I said it was nice, bitter, good finish but lacked some of the attributes of what I would term a Scotch ale. The bartender agreed saying I was not the only one to say that. 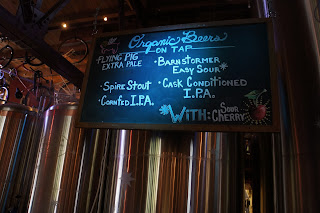 Also tried an ersatz Kriek, with an appropriate amount of organic natural sour cherry syrup added to the sour ale - actually much nicer than one might expect.

The Blue Star has a full restaurant but I did not get to try the food.

Walking back towards town, stopped in at the Friendly Spot. 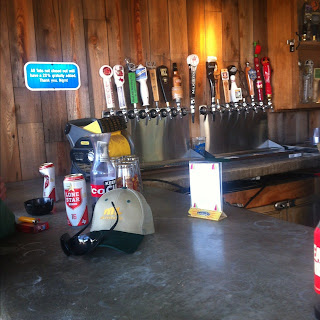 Again apologize as I did not note the bartender's name, but a younger guy who was very beer-savvy, friendly, outgoing (have a good time at the wedding). Did get to meet the owner - Steve. First up was

I rarely do this, but this is what St. Arnold says of their own beer: "Pumpkinator...   is an imperial pumpkin stout and our answer to how a pumpkin beer ought to taste. ...10% ABV. It is brewed... for a background hop flavor, pumpkin for a rich mouthfeel, molasses and brown sugar, and spiced and dry-spiced to make it feel like you just walked into your mom’s kitchen while she was cooking 37 pumpkin pies." Yes. 37 pumpkin pies. And that dear readers gives you an indication of what a beer must have to rate a "10".


Was peckish enough to order some blackberry bbq pork sliders, 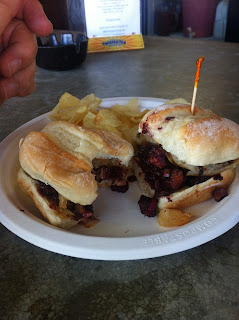 to go with a

Now as the Friendly Spot had one of my favorite beers - Hommel Beer from Van Eecke brewery (which I have toured) - this gives you an idea of the breadth and depth of their beers. 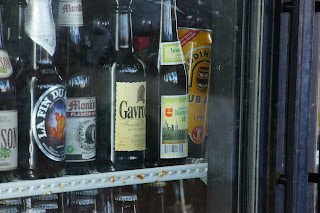 Also amazed at the women drinking unusual beers, especially several who wanted Pumpkinator as well. Finished off with a
Spoetzl Shiner - Shiner Holiday Cheer [#3,316]
as I was heading back to Lüke. 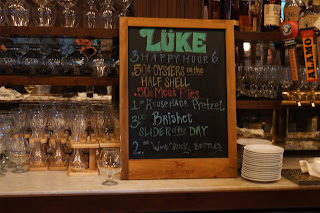 which is a perfect accompaniment to raw oysters. 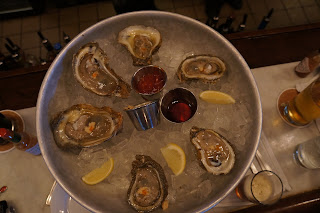 Saw Jason again, who seemed surprised - yet pleased - I had returned. I said I had promised to be back; wearing the proper Club-Belgique colors. Tried a 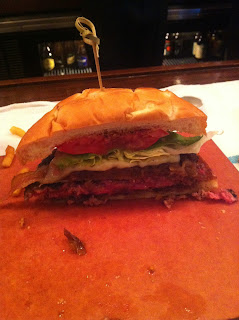 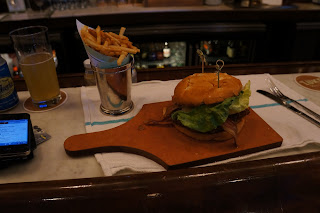 I felt personally guilty about that one Belgian, as I wanted the entire trip to be Texas beer. However someone sitting next to me extolled the virtues of the Belgian Wit, so I had to try it. When I tried to convince her and her friends to try the "frites" with mayonnaise (Belgian style) that was a no go.

So we have a trip where a hurricane was avoided; 26 new beers were sampled, rated and scored; and several wonderful people were introduced to Club Belgique.