After a long meeting in Hartford CT, where do you go? Well, I would choose City Steam.

This past Wednesday (Oct 23) after an arduous meeting, Club Belgique members Bill and Mark and Mark stopped in at City Steam brewing. 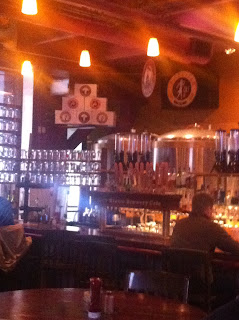 However, to tell the full beer-story, that night before we tried some beers; this included

Note someone may ask "why is Postel Dobbel counted twice, in that you had it as beer #3,273 in Belgium?" Well dear readers, that was a Dobbel from the tap; this was a bottle. And yes, there are distinct, subtle (sometimes not too subtle) differences between draft, bottle, hand-pulled, etc. 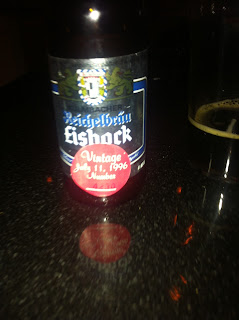 Also tried a fantastic aged Kulmbacher Eisbock from 1996 [#3,286], which was an amazingly rich aged flavour without any harshness. A friend's 16-year old son - born the same year this beer was bottled - got to try some as a rare treat. City Steam always has a nice selection of beers on tap; and as a restaurant the appetizers are always first-rate. This time around the beer sampled included

The one we agreed was the best - all were very good - was the Innocence IPA. Not too hopped, as sometimes happens, it offered an aggressive sweet taste and finish, without being too astringent.

Wished we could have stayed longer.
Posted by Beeriffic at 4:58 PM