It’s always hard to say what makes a good beer fest. Well, beer for one; we can certainly start there. After that there’s a whole host of intangibles, so let’s look at why I liked the latest Beer Advocate Belgian Beer Fest - Night of the Funk - in Boston this June.

Now truth be told it was not all Belgian brewers - like say the Modeste Beer fest in Antwerp; or even all “Belgian styles.” There were some Belgian styles such as Saison and Lambic represented, as well as several others. There were mostly American breweries, a smattering g of Belgian, and a few others from Canada and elsewhere.

What struck me was the Zen of the festival. All signs were the same, in black ink on tabloid size paper. Sure you could have signs in front of your table, or crazy ways to rinse a glass, but there was a sense of “we are all even”; at least how the festival is concerned. 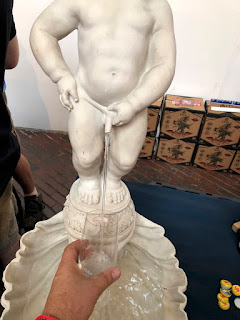 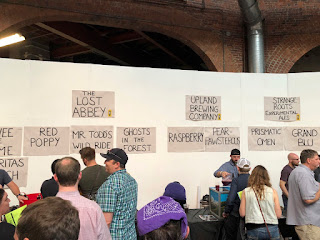 The room was also a circular rotunda, with a nice open airy feel to it. The Cyclorama was the IMAX of the 1800s, was where you went to look at large panoramic paintings. And there’s a few more things that make for a good beer event. The food was located inside, was quite good and a fair price. Nothing frosts me more than an event where you are effectively trapped, and someone is going to exploit that be selling you a sammich for $12. The exquisite grilled cheese from Roxy's Grilled Cheese was amazing. 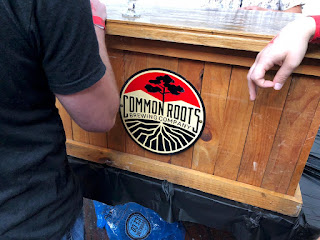 And bathrooms; let us not ever forget bathrooms. Carroll O’Conner as Archie Bunker made famous the phrase “you can’t buy beer Meathead, you can only rent it!” I’ve been to shows where the bathroom count is criminally low; this was not the case. Nice clean bathrooms with essentially no waiting.

All the folks pouring suds deserve kudos. Most beer fans were there for exactly what they wanted, I actually heard a few say “eww this is sour” (Hello McFly, a SOUR ALE?) Spoke with a lot of folks and had a really, really great time.

So all in all, by any standard a great event with a certain “je ne sais quois” - which means it was even better than expected.

And oh by the way the beers were pretty good!

At the end, went to the Tip Tap Room to meet up with some friends, meet some new folks, and try a few more! 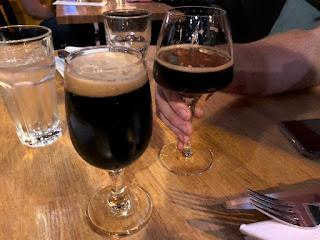