A Happy (or Hoppy) Wednesday

2013-02-13 MR WO
In which an ancient wrong is righted, and a missed opportunity is now opportune (and then some).

As time permitted on this glorious day, it was a quick shot down the MA Pike to Pioneer Brewing before a meeting in CT. 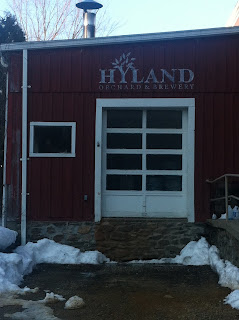 Pioneer occupies a special place in several Club Belgique member's heart. We'll never forget the very cute, young barmaid who said the IPA was an "Industrial" Pale Ale. (N.B. to non-zymologists - the "I" stands for "India" - look it up). Anyway, it was so cute and sweet of her to say that, no one had the heart to tell her otherwise. And frankly - she was cute and sweet.

Imagine the surprise when it's discovered it's mere wordplay: a Pale Ale called Industrial, for "IPA"! Well, colour me SRM 12, or surprised. 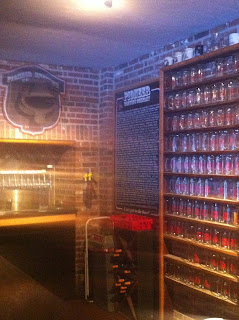 While there enjoyed the new, larger bar, and a sampling of the offerings:
Belgian IPA [#3,563]
EBB (Extra Special Bitter)
The New Frontier (double "California" IPA)
American Nitro Stout
Into the Woods (Vienna lager) - really nice representation of a Vienna-style lager. Having been to Vienna and tried the lagers, trust me.

From there it was a short drive to the Tullycross Tavern, which as luck would have it was like 6 minutes from the meetingplace. As regular readers may have noted, some Club-Belgique members had a brief tour of the brewpub earlier in 2013. However, the keyword is "brief" as we did not have a chance to sample anything. Now we could - or at least some of us could -  rectify that omission. Brewer Brian was there, and seemed genuinely happy to see some of us again. Was able to sample the:

Cask Barrel Aged Imperial Stout (hints of oakey vanillin, quite a good result)
which was - as one might guess - spectacular. And one has to admit that one could not cajole a 1/2 growler out of Brian! Evan after promising a taste of Sink the Bismark or Armageddon, he did not budge. We can appreciate that.