2013-02-04 MR
This is definitely not the TV show "The Office". Apparently a boutique chain in NJ area, The Office has a very beer selection; and a pleasant food menu to boot. 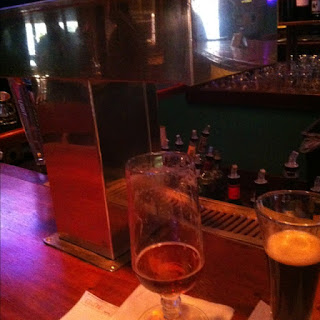 Was not there super long - as it was a work night - but had a pleasant conversation with the manager and the bartender. We initially laughed as one beer desired was out, and the tap for Harpoon el Triumpho Coffee Porter chose to die at the moment of pour (but was still able to secure a taste).

Very surprising, they had on a 2012 Brooklyn Brewing Monster Ale barleywine. Recommended to the manager to keep 1 keg until 2014 (if they can) and serve as aged or vintage barleywine.

For dinner, had a high protein low carb steak salad, nice and rare, even joked it would be consumed raw if need be. Pricing was more than fair, as it turned out part of the evening was the "happy hour". 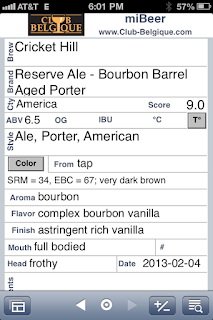 ending the night with a

Unfortunately, next day was the "real office" (although truth be told, they do pay the bills)