First some updates
1) bloggers will be identified by initials; there some great stories out there from C-B members (Mr. IC, Mr. CA., etc.) who have not written an article yet.
2) There will no longer be a numerical rating of anyone's beer - a numerical rating (e.g. 8.7 of 10) is subjective.
3) Reminders will be at the top of each blog post from here-on-in.

Remember, go to Club Belgique and join! It costs a whopping $0 to do so.
Join Club-Belgique by: a) joining the forums; b) telling uswhy you like beer
That's it, and once voted in, every other month someone wins a Club-Belgique shirt!

Now, Vault Brewing in Yardley PA has a riddle for a name. Why is it called Vault Brewing?
Well, the most basic, simple reason is the answer - they have a bank vault! 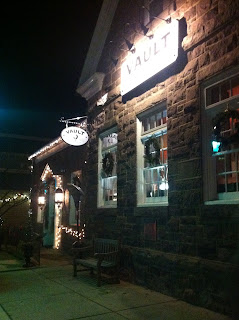 This is also the "newest" brewer that any member from Club-Belgique has ever visited. Apparently opened in early October 2012, they weathered hurricane Sandy as they had a generator and a wood-fired pizza oven. 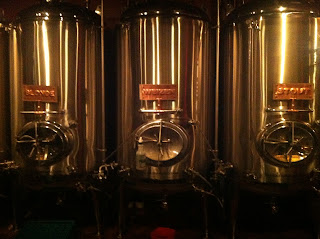 Started by a cadre of brothers the place had some nice touches (hammered copper signs on the tanks) and really eclectic food. I mean, prosciutto, fig and goat cheese pizza? But wow, the flavours come together so well, really nice. 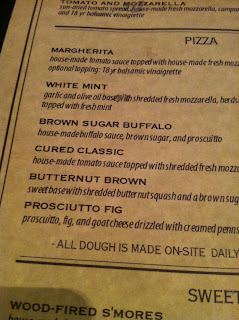 What was also really nice was the beers. As they are a new brewery, they are apparently playing it safe with some tried-and-true styles. Although apparently they make a sweet potato beer that is very good. Thanks to everyone who came up to the bar to ask if it was available, to be told in a week or so (not when I'll be there).

Also the first time that a Club-Belgique member met someone from Untappd. Looked at who was trying the Vault's beers, and asked some folks nearby who had Untapped on their iPhones "any of you guys named 'Bob'"?

They also have a stainless steel growler, which is unusual. They also swap "dirty for clean" so they can properly wash the growlers out; talk about service.

Now one thing to be aware of, so you do not have the crap shocked out of you. There is a giant sculpture of a horse's head in the men's room. Dressed, season appropriate, in a Santa hat. Not all that conducive to micturation. 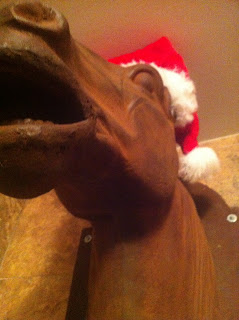 Good start Vault brewery, next year about this time lets have a Tripel, a Winter Warmer, and maybe, just maybe, caged 750 ml bottles of a Barleywine.

Posted by Beeriffic at 7:49 PM