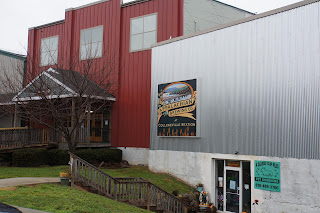 it was just a hop skip and jump to Appalachian Brewing in Collegeville. Have tried some of the beers before, and since we had just eaten, no food was needed. But folks, if someone is tasting beer, they are probably a beer fan.

Suggested question and interactions are:
1) how was the beer?
2) did you like one more than the others?
3) would you like a glass of water?
4) do you want to order any more beers to drink? 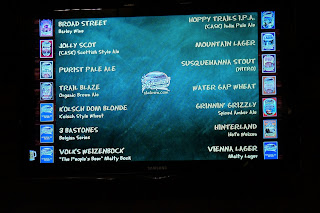 Had no opportunity to sample any others...

Drove to the River Horse brewery in Lambertville NJ. 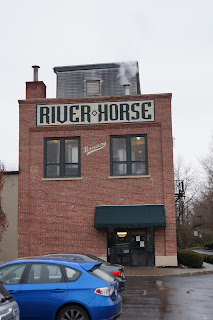 Again with the water-theme on this trip, for some reason. River Horse was not chosen due to any connection to cryptids (i.e. water horse), but to hippopotamus. Supposedly - and this has yet to be verified - the Egyptian or Babylonian word for hippo is the same phrase used to name beer brewing?

Interesting mythology; the building that currently houses the Water Horse was historically allegedly where those ubiquitous "oyster crackers" were made? 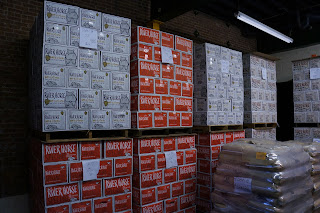 The brewery offers tours on the hour - on weekends - and it's a very informal walk through the production areas. Apparently even if only 1 person wants a tour, they will give it. 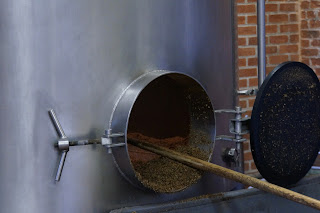 There were 4 beers on tap to try, but also some "brewers choice" came out as well. Although not fully carbonated it was great to try these straight from the fermenter; I mean, how fresh can you get. Very friendly staff, and had a nice time. 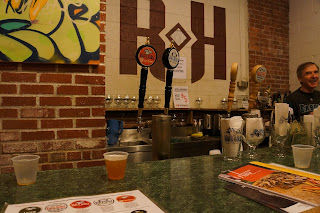 Beers sampled were:
Belgian Freeze - not an "ice beer", more of a Belgian special ale [#3,406]
Tripel Horse - very very nice
Hop Hazard - not as hoppy as one might guess
Scotch Ale - fresh from fermenter
Oatmeal Milk Stout - that's right, not just oatmeal or milk
Hop-A-Lot-Amus - maybe should win a prize for the most convoluted name to resemble " hippopotamus"? [#3,411]

So worth the drive to get there.
Posted by Beeriffic at 7:04 PM