New York, New York. The city so grand they had to name it twice.
I [heart] NY.
The Big Apple.
The Big Easy, wait... what? No that's not right. Well, some of this was written in the wee hours before bedtime, so please forgive my mixed metaphors. Or whatever.

What does NY have compared to other cities? Besides EPA Region 1's office? It has wonderful food, fantastic architecture, friendly people, and bars up the wazoo. 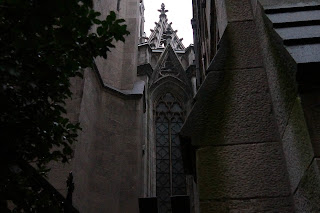 Of course the Rockefeller Center Christmas (we can call it that - right?) tree was #1 on the list to see. As it was dreary rainy cold and wet there was not as much sightseeing in the scant amount of daylight left. 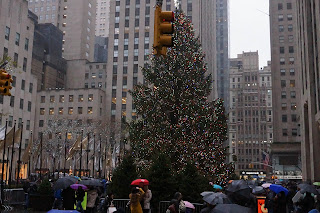 Did not see Tracy Jordan or any of the cast of 30 Rock. However did find Del Frisco's grille. Nice place, and had my first surprise - a free beer. A group was coming to sit at the bar, and someone asked if I minded moving (did not) - the guy said "what are you having, it's on me." Free beers are always good. Free beers from friendly strangers - even better. 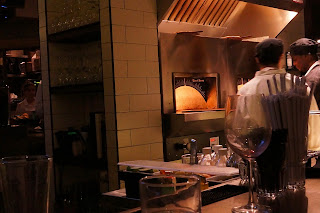 The place had a great looking brick pizza oven, but opted for the lamb sliders as lamb is a fave. 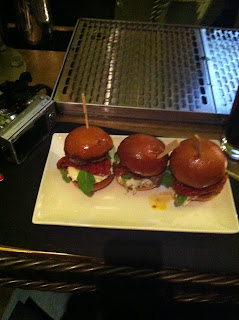 and had one more beer before leaving to see what else there was on the agenda. Had these on tap: 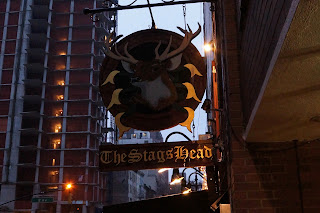 This place came well-recommended as a place for good American craft beers. More of a beer bar, there was a restaurant as well, but the beer in this case was paramount. The bartender was very friendly and was happy to explain to me and others what was available. Tried the following: 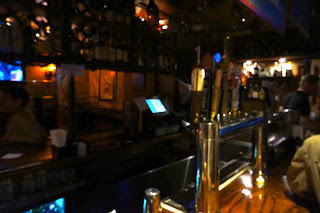 At this point had an almost transcendent experience, one that beer fans will recognize and savor. A couple were chatting with the barkeep, about what to try. There a bit of dissing of a Rhode island beer on tap, and I did defend their dark lager, as it is in fact brewed by Cottrell Brewing.

The woman spoke up and said something to the effect that she and her husband had just discovered Belgian beers for the first time - today. She (innocently) asked: "Do you know anything about Belgian beer? Do you like Belgian beers?"

Smiling and pointing to the Club-Belgique shirt logo, I replied that yes, there was a minor passing familiarity with some Belgian beers (400+/- at last count, with more to come later in the evening). We three had a great conversation about beer and Belgian beer in particular. Suggested they check out Club-Belgique, and join if they want to (remember it's 100% free).

Told a few brief stories about some of the places the Club has met, especially the De Koninck brewfest in Antwerp 2011 and 2012. They told me about the BXL bar, which I passed by on the way to the Stag. They admonished me to promise to go there. I was meeting a business contact soon, so I texted him the address - said my goodbyes - and wished all a "Merry Christmas, happy holiday". 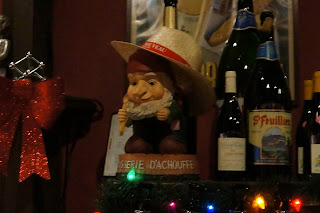 Upon entering BXL (technically BXL East, or "The Best Belgian Beer and Food in New York", which we were inclined to agree) one first sees the cute (or hideously haunting) La Chouffe gnome over the bar. Then, the magic starts.

Club-Belgique rule of thumb #7 - any bar with a house beer (and it's not a brewpub), it's probably a great bar. BXL has their huisbier - BXL Cuveé allegedly from Ommegang. Good complex flavour with a hint of coriander finish. 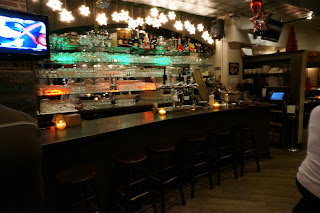 The place has a lot of beers, and I mean a lot. They also have a fantastic menu that is exactly what one would expect from Belgium. Things like hanger steak... 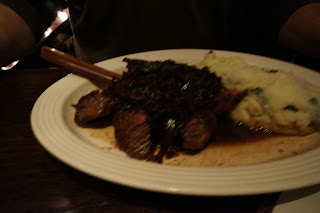 ...and steak tartare, which were both fantastic. Note tartare means "as rare as you can".
Meaning really really rare.
As in raw.
As in the mitochondria are still functioning. 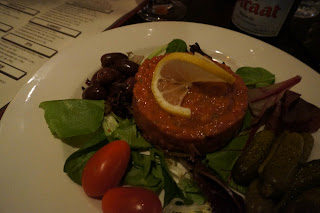 The bartender and waitstaff were very accommodating, even suggesting which beers to try. And more to the point - the beer. Tried the following: 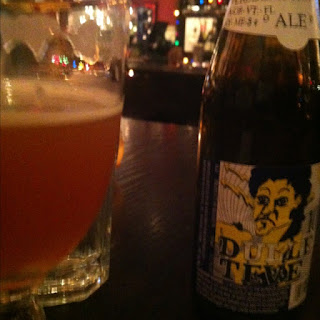 Sadly, had to end the night while it was still young, and gird my loins for the next day's (metaphorical) battle; but there will be many more visits to NYC.
Posted by Beeriffic at 7:52 PM