In which MR and MS and MB sample many beers, run afoul of the local gendarme, find some unusual credit card policies, and enjoy an unplanned holiday.

Bonjour, hier je suis... waitaminit, yesterday (2013-05-17) was the first day in Montreal. Now with any city you visit, the most important is to pick the cheapest hotel that is also the closest to the brewpubs and breweries. 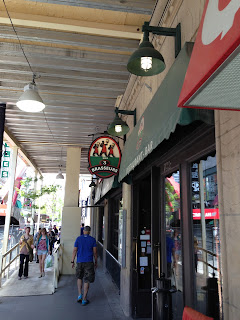 First off, being 500 feet from a brewpub is a good start. Had lunch at the 3 Brasseurs (brewers) which is a boutique chain brewery. 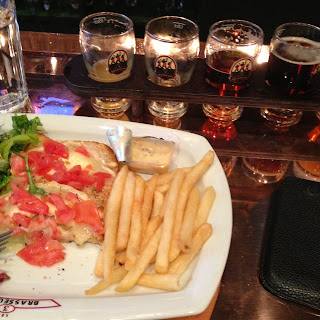 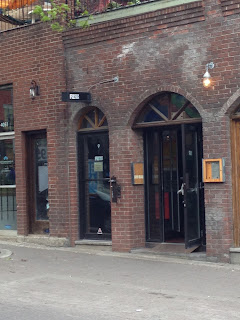 Next up was a tiny brewpub - Rēservoir. To cleanse the palate had some wonderful, fresh crisps. 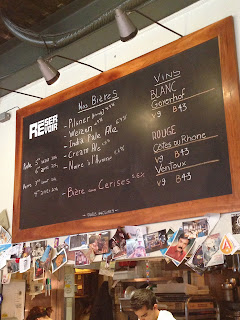 Did get to speak briefly with the brewmaster, and made plans to be back to try their bottled Saison and *gasp* Barleywine. 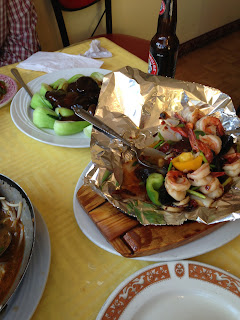 Being hungry and as MB was staying in Chinatown, decided to try some Asian food. Stopped in at Déliceux Montreal on 1051 Blvd. St-Laurent. Great food, also had a
St. Amboise - Noir Avoine (oatmeal stout).
What was odd is that this restaurant did not take "American" (i.e. no 'chip and PIN') credit cards!! Thank goodness we had enough cash. 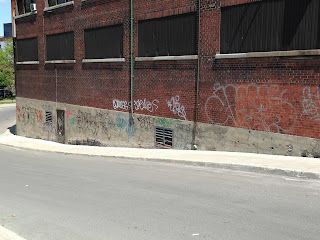 Now what do you do when you are at a "don't walk" signal, and there is no traffic for as far as the eye can see? I mean, unless Doc Brown appears in his chronologically-enhanced deLorean, even a moderately fast tortoise could make it across safely. Well, turns out in Montreal, that is against the law. The local constabulary stopped and gave a reminder that this is normally punishable by a fine of $40; thankfully as ignorance is easy to forgive; there was no tariff levied! Merci! 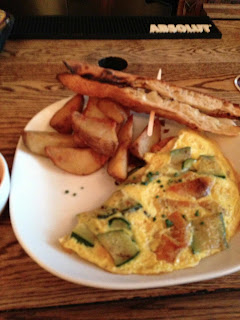 Anyway, as food was needed, a brunch at L'Assommoir was needed. Fortunately their bar was open, and besides a fantastic vegetarian omelet, sampled 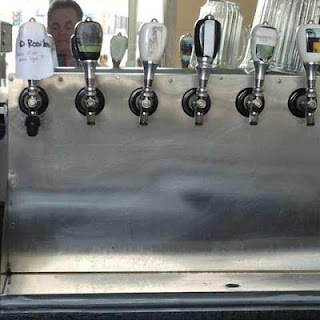 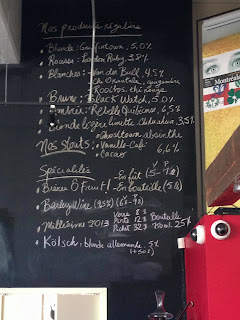 Fortunately, les Brasseurs de Montréal (the Brewers of Montreal, sounds sort of dull in English?) opened at 2:30; let the tastings begin. Situated in an industrial area at 1483 Ottawa, les Brasseurs had quite a selection of beer, and not all were tasted, unfortunately. They also had a good menu of meals and snacks, and some crisps and cheese were purchased for palate-cleansing. They offered proper flights or "degustations" or "l'etchétéra", and beers tried were: 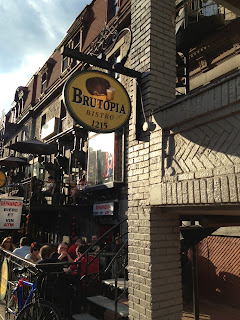 Next up was Brutopia, at 1219 Rue Crescent, where the following were enjoyed: 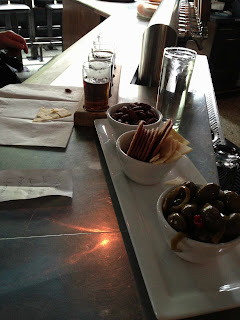 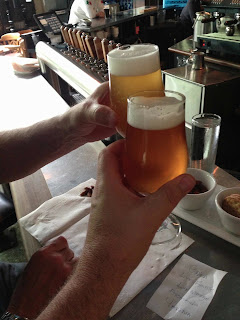 Then on to BENELUX - Brasserie Et Café, at 245 Sherbrooke street west. BENELUX, for those who don't know it, is a sort of semi-mythical union of BElgium, NEtherlands, and LUXembourg from 1944, but certainly implies good beer from that region of Europe. And there was no disappointment. Besides a nice outside café area, the bar set up was a great place to quaff and chat, all while gustating:

Cigogne - pilsner lager
Gaïa - Belgian blonde
Lux Rousse - red ale
Yakima - pale ale
Cactus IPA
Believe they use Amarillo hops, which have a distinctive character, so you think Amarillo TX USA and get "cactus"; however Amarillo hops are only grown in Washington state.     [NOTE, the folks from Benelux responded: "Thanks for visiting us! great coverage of Montreal in places I haven't visit in a while. BTW: Cactus IPA is named after the bar for whom we contract brew this beer. No Amarillo in there: Simcoe+Citra" 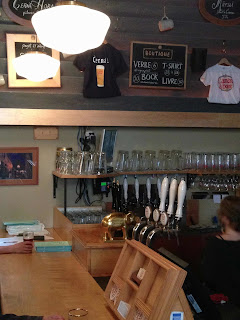 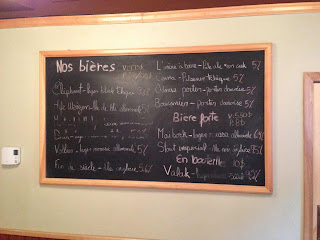 Leaving BENELUX, headed over to the L'Amère à Boire on 2049 St-Denis. Deliberately did not want to try all their beers, as there were specific plans for MR beer #4,000, so only had their:

Then it was back to the Rēservoir, which had been visited previously, but had a beer with a great potential to be counted as "milestone" beer. Caesar, the very accommodating bartender, welcomed us back, and remembered the plans for beer 4k. First off, with some snacks, tried their:

Noir à L'Avoine - oatmeal stout
Cream Ale
...before settling on two special beers. Rēservoir bottles certain special beers (which makes sense given the style) in 750 ml, and has these for consumption only in the brasserie. First off, the 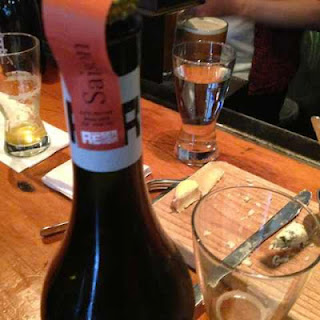 Saison
was a standout, and at 6.9 ABV was not a beer to drink without sharing. Fortunately, in any good beer bar there is a lot of camaraderie, so a couple of people near us were only too happy to be offered a pour.

The next of course was their 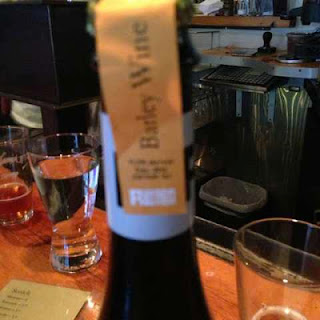 and the question is how good was it? Marveilleux! It could be even better, or at least quite different, after some aging. What was even nicer is the bottle - as a trophy - was allowed to be taken. Merci, Caesar!

Later the next day's evening - 2013-05-20 - it was out and about, starting with a fantastic hookah/cigar bar - Café Gitana - on the way north from Brutopia, and besides some Cbaños, shared a 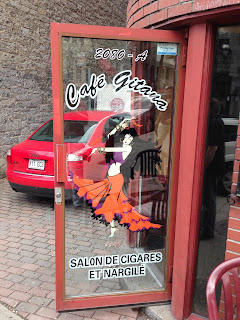 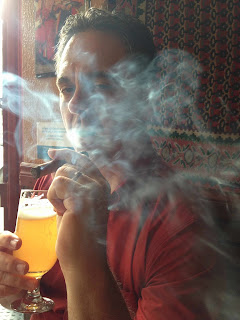 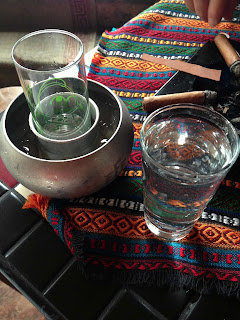 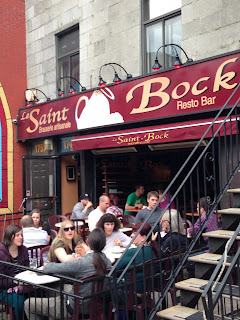 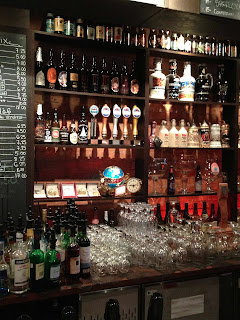 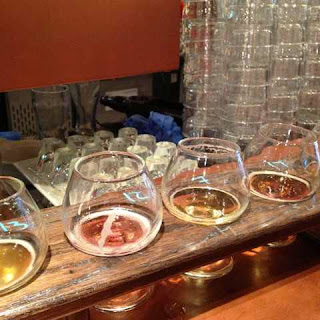 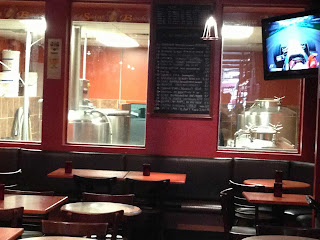 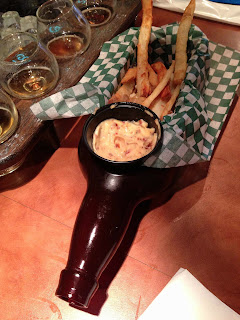 Next was the Le Saint-Bock Brasserie Artisanale, at 1749 Rue Saint-Denis. What was very unusual about this place was that they sell other beers besides the ones they brew. Asked the bartender to start with the lighter ones, and go down the list. 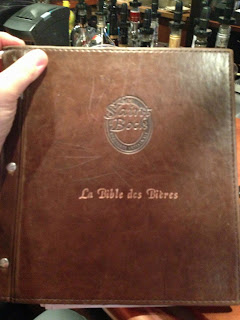 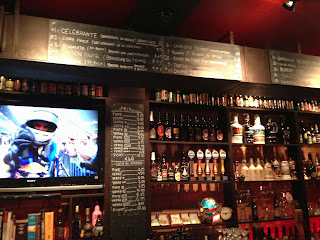 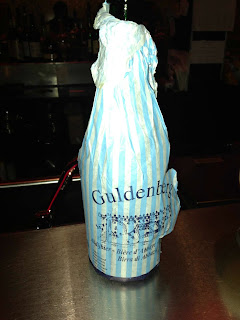 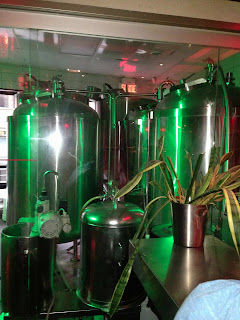 From there it was to the Le Cheval Blanc at 809 Rue Ontario Est; as the night was getting late (altho they are open until 3), we only tried their

Posted by Beeriffic at 4:23 AM