No I didn’t actually have beer in space; at least not yet. The fact I wonder what would happen if you brewed beer and space; I mean you have top fermenting ales and bottom fermenting lagers. What would happen in the absence of gravity even artificial gravity like centrifugal force?

Anyway I had the pleasure of being a guest lecturer at NASA, in Langley VA. Had never been there: it’s the oldest of NASA’s facilities: started in 1917 by the National Advisory Committee for Aeronautics (NACA). 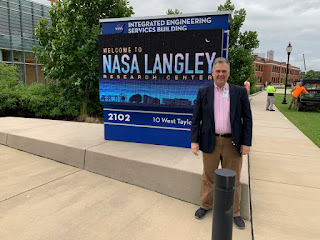 It was a great time, and a lot of fun. It was profound to see that we are not only going back to the Moon, but to Mars as well.

Got us a try space sushi as I called it because it was from the cafeteria at NASA (ha ha). 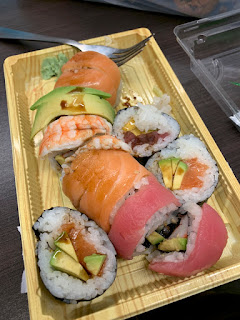 Of course when you want to try beers things always work out. I walked to a brewery one night, near the hotel. Without naming any names (the hotel was at City Center - you do the math). I arrived at 8:50 and was told “we’re closed.” It did surprise me because most businesses want that last nickel (me included) in any. So I asked you’re close to nine? And was told yes we close at 9 but taps shut off now.

That was kind of sad because most places really welcome you, and in their defense maybe some draconian laws require shutting down early? But this of course beer karma would dictate more than made up for the next day.

This must be NASA - look at the upload speed. Take that Charter! 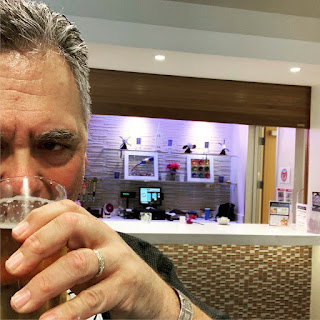 First, at the end of the day went to a small bar called Afterburners, which opens up on campus. again nothing spectacular but drinking a beer at NASA is a nice check box thing to do bucket list item.

As a group a lot of us went to Oozlefinch brewery, and just had a great time. 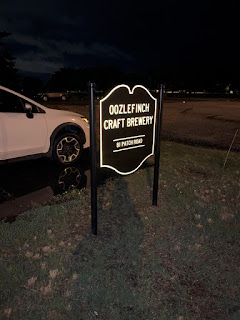 My host from NASA did set the bar high because he kept telling people how much of a beer fan I am; so some people asked me what they should try. 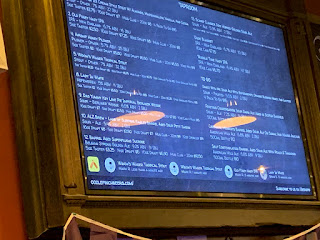 Certainly I did defer to brewery employee Cliff, because I was not really sure exactly what they had or what their flavor spectrum was like. 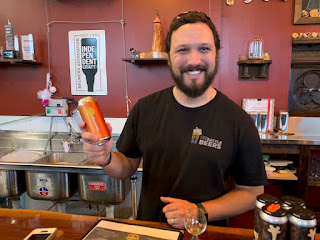 As we were drinking I asked our host if he had ever had Tree House.? Now let me first say that I travel with a lot of different beers, and Tree House just hot right now; and they make some great suds. So he said yes, he did and they like to try other beers for flavor comparison. So I pull out my bag a Treat and said here you go. He then pulled out Eatin’ Cancakes (not labeled for consumption outside) so we had to drink it there. 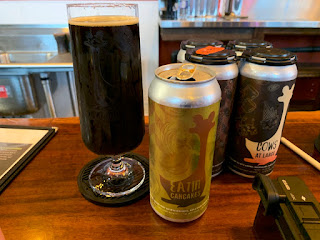 This beer is made up of a near lethal amount of maple syrup and pancake batter; so yes it did taste like maple syrup pancakes - I kid you not. A perfect example of a “pastry stout” whether you love them or hate them. Several of the people in our group tried it; one woman said she said she didn’t like dark beer and I said try this: her response was I love dark beers now! But someone else admonished her they’re not all going to taste that good.

We were all laughing, then I pulled another Tree House, which prompted Cliff to give me a sour (Riveting conversation) to take home to share with my kids - which I did. 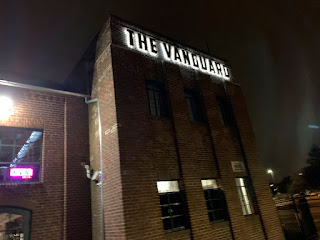 I took a short Über ride over to Caiseal Beer & Spirits (pronounced “cash-EL”) - brewing and distillery in the Vanguard building. Now here’s the difference between the way some places work: I got there at pretty much 9:50; I thought they closed at 11 but they closed at 10. But in the minutes that were left I did buy a beer and they let me try one of their beers. Since they were also a Distillery I asked to see what they had for sale, but they explained because of the liquor laws they cannot sell bottles of hard liquor to go after 6:00 PM

So all in all a great time.

Posted by Beeriffic at 5:19 AM