As the 2nd day of a 2-day tour of breweries, Club-Belgique members in the New England area set out for the smallest state, with the l-o-n-g-e-s-t name. Yes, the full name of RI is "State of Rhode Island and Providence Plantations" - so there! As with all events, there was a driver designated not to drink. You always, always do this.

The initial brewery stop was at Grey Sail in Westerly, which graciously opened just for our tour. Note that our tour had a small fee as they opened off-hours (which is greatly appreciated), but this is made up for the fact that there was a nice etched pint glass as part of the tour. 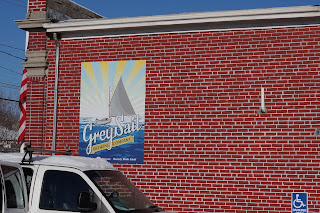 We were initially not sure that this was the right place, as the building clearly said "Westerly Macaroni Mfg." at the front. 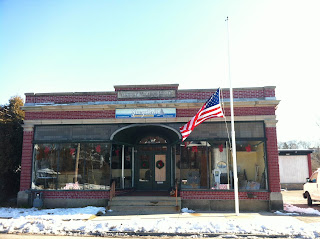 This was part of the heritage of the site, which included the original wood floor and tin ceiling in the tasting room, as well as the "leaning chimney" (more later). 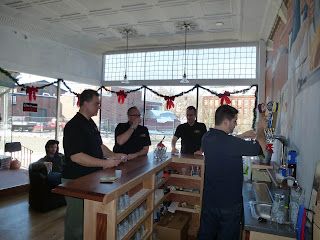 After the tour we emailed the owner - Jennifer - to thank her and compliment her staff. About the building's character she said "...it is our intention to always maintain, and hopefully restore a little more as our finances allow, the front of our building.  We love it.  Too many times history and character get buried for the sake of saving a few dollars or making something look ‘cleaner and newer’." We could not agree more. 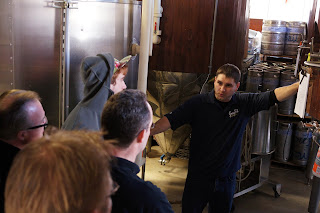 Dan the Sales Manager was in charge of the tour, but you could easily tell that he has done more than one or two of the other jobs associated with brewing. Grey Sail is relatively new, having opened in late 2009, and - except for special beers - is exclusively a canning operation. 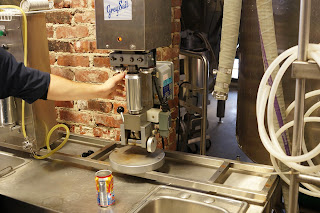 Before any "glassholes" start ranting, cans have several advantages:
- cans block 100% of the light, not 90% or 99%;
- the seal on a can is a more perfect hermetic than a bottle cap; 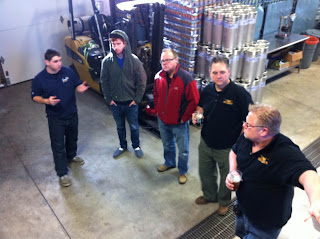 - it takes less energy to transport cans of beer due to their weight compared to glass;
- cans takes up less vertical space than a bottle;
- cans cannot explode like shrapnel, nor shatter into jagged edges when dropped
- cans are all lined with an FDA-approved, biologically inert plastic that obviates the concerns about "metal taste". 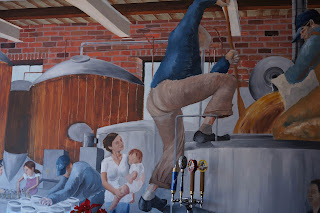 There's probably more; the only comment is that very generally speaking you do want to pour off the can into a glass, and before you do wipe off the top of the can. There are some beers that recommend drinking out of the can for maximum initial flavour, but those are few and far between, and tend to ignore the role the nose plays in the taste factor. 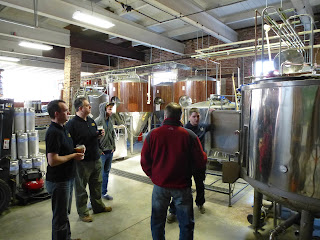 We tried a range of the beers Grey Sail produces:
Hazy Days Belgian Wit
(this was a fantastic beer, perfect combination of aromas and taste)
Flagship
(a cream ale, which some people do not always like, but as the proper style as a cream, this was a good representation) 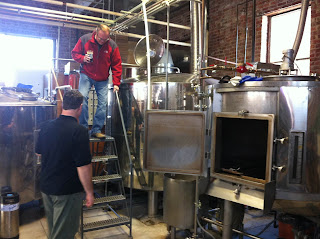 Flying Jenny
(This is an EPA or extra pale ale, very flowery hoppy aroma without being too cloying; quite a standout as well) 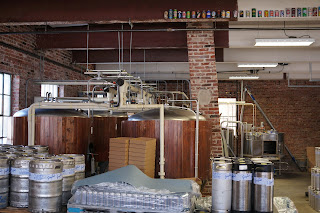 As part of the tour, we did see a seemingly-odd structure; a badly leaning chimney in the brewing area. 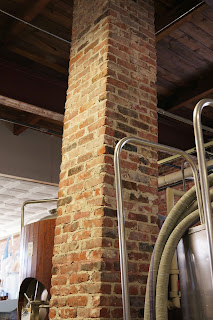 Dan explained that this became sort of an inside joke, as one of the beers is in fact a smoked (get it) porter:
Leaning Chimney
(this had added peat with a smoky phenolic aroma and soft peaty finish; really a standout smoky porter in a field of dozens.) 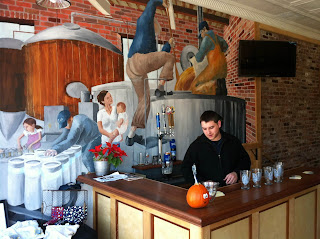 At the close of the tour Dan produced one more beer to try, that we - as members of Club-Belgique - cannot thank you enough. Grey Sail made an Imperial Pilsner lager for their first anniversary, named
First Anniversary Imperial Pilsner
(except, as the last 20 or so bottles were said to contain some yeast sediment, this was a bottle-conditioned imperial pilsner).

We said goodbye, thank you and headed out for lunch a whopping 1/2 mile away to the Malted Barley in Westerly. 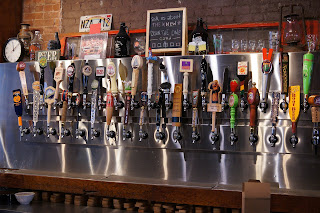 The Malted Barley also is a relatively new place. It's hallmarks are two: pretzels used as the bread in sandwiches, and a really good selection of beers. The place even had a bottle of 2012 Utopias for sale, if you so dared!

Now someone couldn't come as they were making soupy (sopressata), but they do not know what they missed. 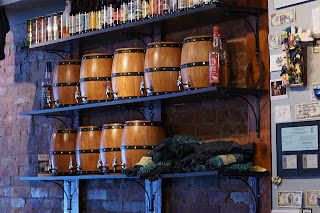 Stephanie was our bartender, and she described learning about the beers she served, some of which was new to her.  We also got to chat briefly with a couple who appeared to know more than a bit about beer. 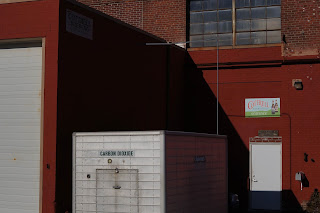 From here it was Cottrell Brewing. As an FYI - it's pronounced: co-trel. 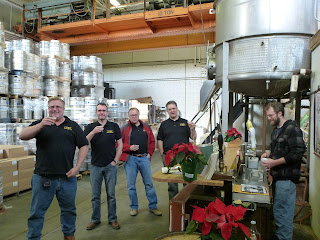 There was not a lot to see (no tours, just taps) but it was nice to talk with Drew, who was serving. Beers sampled were:
Oktoberfest
(got a couple of growlers to go)
Safe Harbor
(this appears to be the beer brewed for the Great New London Brewing Company) 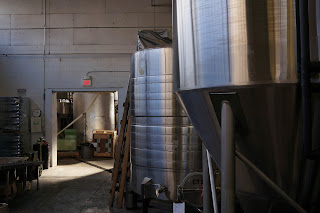 Drew tipped us off about a new brewery, Beer'd, that had opened up recently in Stonington CT. What was odd was that this did not show up in a Google search.  Try this: go to Google Maps, search for Stonington, CT; then click "search nearby" (at left) and enter "brewery". You'll see Cottrell and Grey Sail brewing. However, search instead for "breweery" (yes, 3 'E's) - the first hit is Beer'd Brewing Co. LLC! Weird.

Anywho, we headed over to the location, which was in a rehabbed velvet mill. 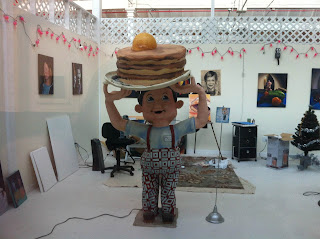 Sadly, the Beer'd brewery was closed for some refurbishment and brewing. We will have to stop back next time. 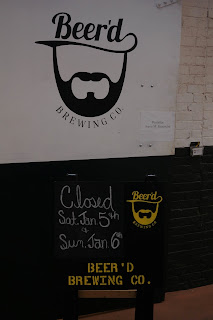 As it was getting late, it was decided to not head east towards some other brewers, and instead head back for dinner of salad, guacamole, chili and pulled pork. Besides some of the growlered beers, a special Mc Thals from brewery Dijk Waert. 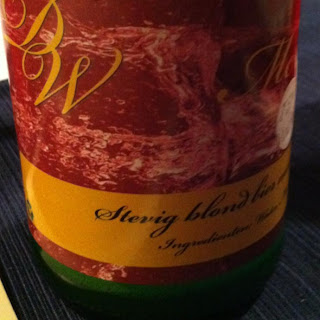 Now what was special about this, is that at the time we drank it, there were only 2 bottles in the US. Later that evening, some of us dared to try a Mikkeller 1000 IBU. Yes, even though in theory one cannot taste much above 100-125 IBUs, this beer allegedly has enough dissolved alpha acids to top out at a taste bud abusing 1000! 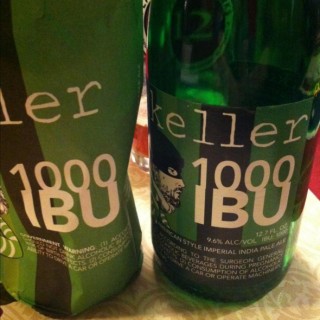 This is not a beer you drink the whole bottle of. This is a beer you sip, and eat something between each sip! It was horrible, amazing, abusive, phenomenal and terrifying at the same time.